The AS100D is the larger of the two amps in Marshall's Artist Series acoustic guitar amps with 4 channels, stereo output, and 100 watts of power (50 watts per side).

NB: The 50 Watt version is still available - you can see our analysis of it: Marshall AS50D.

This one is designed for gigging and playing at larger venues.

In his review for Acoustic Magazine Guy Little said, "Whilst this is a great sounding amp, it’s definitely intended for stage use. If you want a nice tone for your guitar alone, around the house and practice room, this big lump of an amp is going to stretch your arm far more than is really merited. If, however, you want a good stage amp which can cut it even when you need two guitars and vocals, it might just be the amp for you. At a keen price, too!".

Customer reviews consistently rave about the quality of the sound this amp produces - I even read one review where the customer said they liked it so much that they've purchased their 4th one! It is commended multiple times for its ease of use, which is quite surprising giving the number of controls it has available.

There were a few people who complained about it only having 15V phantom power instead of 48V which means you're limited in the number of condenser mics you can use otherwise they might not sound as good as you're used to them sounding.

The Marshall AS100D is great acoustic amp that performs well both on stages and in the studio.

For alternatives check out our guide to The Best Acoustic Amps.

Here is an older 2015 analysis by Jason Horton.

Marshall's acoustic series amplifiers designed specifically for acoustic guitar are quite popular and the AS100D is one of their better selling models.

It sports 4 channels with two of them having mic inputs - it can handle piezio and magnetic picups as well as vocal mics.

One channel is dedicated to vocal microphones with a mic preamp with phantom power and an XLR socket so it can effectively be used as a mini PA system.

It's rare to see a guitar amp of any kind so highly praised by owners, and when I was analyzing reviews and discussions about the Marshall AS100D it was quite difficult to find much negative sentiment at all. The nearest thing to an outright negative statement was in the Acoustic Guitar Magazine review which said, "Whilst this is a great sounding amp, it’s definitely intended for stage use. If you want a nice tone for your guitar alone, around the house and practise room, this big lump of an amp is going to stretch your arm far more than is really merited. If, however, you want a good stage amp which can cut it even when you need two guitars and vocals, it might just be the amp for you. At a keen price, too!".

There was one complaint I saw from a reviewer who said that after owning it for a couple of years they went to replace the tweeters only to find that the original one was no longer being produced and the replacement ones required holes to be drilled in order to fit them in - this is not likely to be an issue for most people.

The versatility of the Marshall AS100D is almost universally praised whether it's being used just for guitar, or with vocals in addition, and even when playing MP3 tracks during set breaks. Many of the amp's features were consistently cited positively - one in particular was the feedback control system in the amp which appears to work quite well from all reports.

Importantly, many of the reviewers who gave this amp a high rating were ones that said they play professionally or have been playing acoustic guitar for over a decade, which means these guitarists know what they're talking about.

There was a small amount of negative sentiment concerning the 16 built-in digital effects, but for every negative comment about them there were 2 or 3 more who liked them.

A note of caution: some online retailers erroneously list this as a 50 watt amp when in fact it has two 50 watt channels giving it a total output of 100 watts at full power.

For alternatives check out our guide to The Best Acoustic Amps.

Take a look at the following video demo to see the full range of features and effects:

The Best Acoustic Electric Guitars Under $500

Best acoustic amp I have ever used
I even use it with my Gibson ES 335 and it gives it an enjoyable
mellower tone which seems to go well with vocals and a Voice live which I use most of the time for live performances
Would highly recommend!!!!!

I take it that this amp is solely for semi acoustic guitars and unable to handle normal electric guitars ie Gibo Les Paul or Fender Strat..? If it can’t handle an lecky guitar do is there any Marshall amps that do with the brown similar to the look of AS100D model..?

Yes this amp is specifically designed for semi acoustic guitars.

There's nothing to stop you directly plugging in an electric guitar, but you won't get the Marshall tone you'd expect.

You could use a modeling preamp/fx unit, like the Fractal Audio FM3, in between your electric guitar and an acoustic amp to get a more traditional electric tone.

I haven't seen Marshall use this particular color scheme on any of their current electric amps.

I purchased AS100D in 2008, in 2012 the second channel (below main input) stopped working then 1 year later the Mic channel stopped working, the amp is used every week and has had a reasonably easy life. Sound reproduction is up there, but I will think about Fender products for my next purchase.

Hi Mark - Sorry to hear you had problems with this amp.

We did a detailed analysis of acoustic amps back in July and Fender landed in the middle of the field - you can see the results here.

We summarized our survey data in our guide to acoustic amps - hopefully that will help you decide which amp to get next.

The Best Cheap Ukuleles Under $50 - Perfect for Beginners 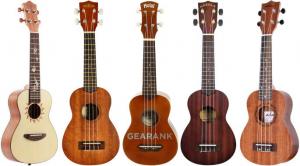 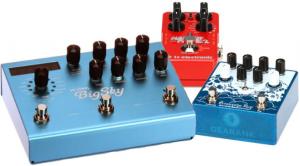