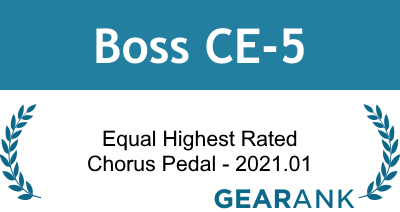 This appeared on our recommended list for Chorus Pedals when we first published it in August 2017 and it was the equal highest rated chorus pedal at that time. It remained on the list until January 2022 when it was outranked by other options - you can see them in our guide to The Best Chorus Pedals.

The first thing that you have to understand about this pedal is that it is pretty digital sounding, which isn’t a bad thing.

The great thing about digital modulation effects is that they’re very clear, which allows them to pair well with darker amps and pickups. However, depending on the gear you use the “digital-ness” of the pedal may sound a bit thin.

An interesting feature of the CE-5 is its filter control. This is basically a tone control for the chorus effect, so should you need to you can make the CE-5 sound a bit warmer. It’s not going to make it sound like an analog pedal, but it can roughly approximate one.

Another thing to know is that this pedal, like others made by Boss, has buffered bypass. The cool thing about buffered bypass pedals is that they boost your signal. This comes in handy if you’re running a longer chain, though if you’re using a shorter change it may alter your tone somewhat.

Importantly, the unit also has a stereo output. This allows you to run the effect through two different amps, which can make it sound wider (you really need to hear the effect in person, as it’s not really something that’s easy to describe).

There's a reliable Boss pedal for every guitar effect need, and like many of their top rated products, the CE-5 Chorus is well worth checking out.