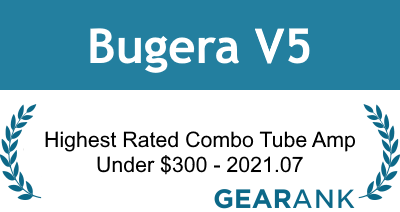 The Bugera V5 appeared on our recommended list for Tube Amps when we first published it in May 2017 and was there until June 2018. It came back onto the list in November 2019 where it remained until August 2022 when it was out-ranked by the Monoprice Stage Right 611815 in the Under $500 price category.

It also appeared on our recommended list for Guitar Amps Under $200 when we first published it in August 2016 and remained there until October 2017.

It then appeared on our Guitar Amps Under $300 list in May 2021 where it remains today.

Tube amps need not be expensive. The Bugera V5 Infinium packs a lot of vibe despite the price tag.

Bugera is one of Behringer's many sister companies, sharing the same impressive ability to balance price and quality. The Bugera V5 Infinium highlights this balance, offering traditional Class A tube amp specs and built-in power attenuation, while retaining a budget-friendly price.

It features a switchable 5 watt, 1 watt and 0.1 watt setting that let's you drive it hard at low volumes, as well as a great sounding reverb.

The single 1x8 Turbosound speaker can also get quite loud and vibey; great for small gigs, recording or practicing at home.

While it doesn't offer much in the way of EQ control with just a single tone knob, it does deliver nice crunchy tube tones.

We've seen reports from guitarists who improved the tone by swapping out the amp's default tubes, and they recommend that others do the same.

Bugera also equipped this amp with their Infinium technology, which monitors and maintains the tubes at their ideal operating level, to extend their life.

If you're looking for a great bang for buck tube amp that you can squeeze a lot of vibe out of, the Bugera V5 Infinium is a great budget pick to get you started on tube amps or as your practice amp.