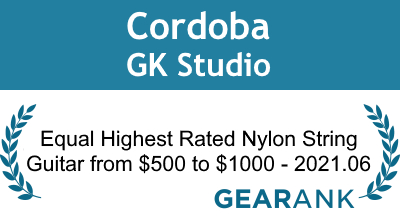 There is another version of this model, which has Rosewood back and sides, that you can see on our Recommended List.

The GK Studio appeared on our recommended list for Classical Guitars from June 2021 until February 2022.

It comes equipped with the Fishman Presys Blend electronics, which combine both an internal mic and a piezo pickup in one system.

When compared to traditional classical guitars, its mahogany neck has a slightly thinner nut width and scale length, which together with low action makes for a very comfortable playing feel that's ideal for flamenco style playing. But this does not stop guitarists from using this for other styles of music including Jazz, Pop, Blues and Folk - particularly fingerstyle.

The back and sides for the GK studio model is crafted from Cypress, which is traditionally preferred by flamenco players.

This is a very well-built guitar, we've seen reports of guitarists using it live for several years with no issue.

The Fishman Presys pickup system allows you to blend the mix between the piezo and mic pickups - very handy when you're having feedback issues on stage.

The Cordoba GK Studio is a good stage-ready entry way into the world of flamenco style music.

*Displayed values are prior to the Gearank Algorithm's adjustments it makes when evaluating the source.
Although this was previously on our recommended list, there are now more highly rated options available which you can see in our guide to The Best Classical & Nylon String Guitars.