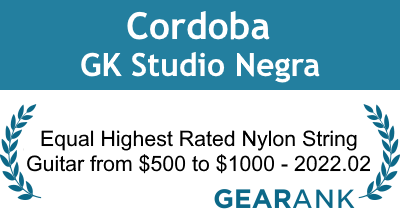 Cordoba designed the GK Studio Negra as a Flamenco Guitar rather than a classical guitar.

It sports premium specs that include solid European spruce top supported by Spanish style fan bracing, and what sets it apart from the standard studio version is the use of rosewood for the back and sides.

The action is nice and low, and while this can produce some fret buzz when strummed hard, that's part of the flamenco style.

But it's not just flamenco guitarists playing it, this versatile instrument is also used in a variety of other styles such as classical, jazz, blues and folk.

The GK Studio Negra, and its GK Studio sibling, is a guitar that many people have successfully transitioned to from steel string acoustics despite its wider nut width than a standard dreadnought.

One of the good things about the pickup/preamp system from Fishman is that it allows you to blend in the microphone pickup to your desired level. Sometimes your amp's feedback protection system can't prevent feedback so you can turn it down on stage, and turn it up for great results when recording direct in. See this video at Cordoba that gives you some good tips for blending the mic and piezo pickups.