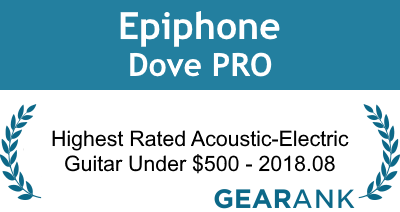 The Dove Studio first appeared on our recommended list for Acoustic-Electric Guitars Under $500 when we published the first edition back in August 2017.

It has remained highly regarded by guitarists retaining high enough ratings to remain on the list for every new edition we published after that until August 2022 when it was out-ranked by the Yamaha FGX800C.

Note: Epiphone has changed the name from Dove PRO to Dove Studio.

The Dove was first introduced by Gibson back in 1962 and it has earned its place as a classic.

While it is unfair to expect the Epiphone version to have the same high-end specs and tone as the original, it does impress enough guitarists to maintain its high ratings year after year.

At its core is a combination of solid spruce and maple, which gives it a subtly brighter tone when compared to conventional spruce and mahogany body acoustics.

To retain as much of the guitar's acoustic sound as possible, Epiphone equipped the Dove Studio with discrete Fishman electronics, with controls that are mounted on the underside of the sound hole.

It is also worth noting that the Epiphone Hummingbird Studio which sells for the same price as this guitar also has a reasonable Gearank rating.

*Displayed values are prior to adjustments made by the Gearank Algorithm when evaluating the source.
Although this was previously on our recommended list there are now more highly rated options available in our guide to The Best Acoustic-Electric Guitars.

Hey, hopefully someone will help me, I want to buy a guitar, and I am thinking about an epiphone dove pro and a apx600 yamaha, the thing is that I don´t like that the yamaha guitar is more like a beginner guitar, or for people with small hands and etc, but I am not sure about the epiphone because I don´t know a lot about the brand and I have not played a lot of those guitars, Thanks.