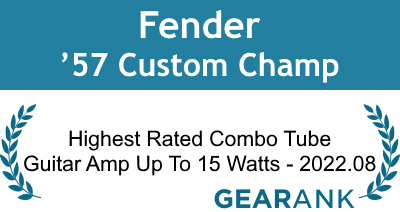 The Fender '57 Custom Champ appeared on our recommended list for Low Watt Tube Amps back when we published the first edition in December 2017 and it has remained there since.

We were also recommending it on our list for Practice Amps Under $1000 from September 2017 until a price increase meant it had to be removed in March 2022.

In a time where amp modeling continues to be popular, its refreshing to see simple amps still doing well in the market - and it doesn't get any simpler than the one volume knob interface of the Fender '57 Custom Champ.

When it comes to guitar amps, louder isn’t necessarily better. You’d be surprised how many famous recordings were made on sub-10-watt amplifiers; chief among them being Eric Clapton's Layla which was recorded on a tweed Fender Champ from the ‘50s.

The focused tone and manageable volume of this small tube amp can actually result in a huge tone when used in the studio. And it also means that you can have great tube tone at manageable volume levels for practice.

The cool thing about this amp is, rather than just being a small tube amp, is a faithful reproduction of the Champ’s used on famous albums (Joe Walsh and Eric Clapton both used them extensively).

This amp is all hand-wired, uses the original 5F1 circuit, and even uses vintage yellow capacitors.

The speaker is different, though it was designed to come as close to the tone of original Champ amplifiers as possible.

Fender used the same font that was used on their '50s amps and even went so far as to include a genuine leather handle.

It's a true plug and play amp, making it ideal for those who get most of their tone coloration from pedals.

If you're looking for a great sounding compact tube amp that won't complicate your setup, we highly recommend Fender '57 Custom Champ.

At time of publication this amp was on our recommended list for The Best Low Watt Tube Amps.