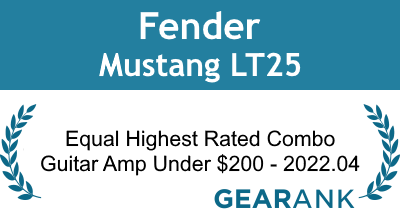 View full award details on Twitter
On October 18 2021 we announced the results of our annual analysis of guitar amp brands - Fender ranked #9.

The Mustang LT25 first went on our recommended list for Modeling Amps in August 2020 and it remains on that list today.

It has also been on our list for Practice Amps since it first appeared the September 2020 edition.

And it has been on each edition of our recommended list for Guitar Amps Under $200 since August 2020.

While there are affordable amps that offer amp modeling and effects, many of them don't have good sounding clean tone. This is why Fender's core clean tone remains to be their biggest advantage over other manufacturers.

The Mustang LT25 packs this iconic clean tone into a compact 25-Watt combo amplifier. It then expands on it via modern Digital Sound Processing technology.

Compared to other amp modelers, it doesn't drown you with too many amp models, providing just enough to cover different musical styles. 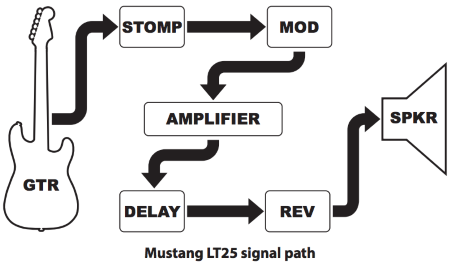 The effects side of the amp houses 25 digital effects divided into 4 sections, first of which is the Stompbox section which include a selection of overdrive, noise gate, fuzz, and compressor pedals. The other sections are Modulation, Delay and Reverb - with each section having a few effects options to play with.

Interestingly, Fender was able to incorporate all these modern features while retaining an intuitive interface, but there is an option for software control via USB.

Speaking of USB, it does allow for direct recording. Other features include a 1/8" headphones out, and a built-in tuner.