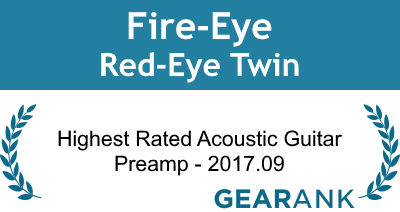 This first appeared on our recommended list for Acoustic Preamps as soon as it became eligible in March 2017 (our eligibility criteria initially excluded it when it wasn't available from major retailers) and it remained on the list until Aprill 2022 when there were more highly rated preamps for us to recommend.

As the name implies, the Red-Eye Twin packs two all-analog Red-Eye preamps into one compact unit including two inputs for two instruments - each having dedicated gain and treble knobs.

It is meant for musicians who switch between multiple instruments at gigs, simplifying instrument switching while providing transparent high-fidelity preamplification and DI-box functions.

There's also a switch that lets you use both preamps simultaneously with separate instruments. While collating review sources to use in calculating its Gearank Rating, we found many positive reviews from acoustic guitarists who also use it with other acoustic instruments like Mandolin.

The Fire-Eye Red-Eye Twin is frequently recommended for multi-instrumentalists who switch between acoustic instruments in performances.

There's not much to work with in terms of tone shaping, but it does have a clean boost footswitch for emphasizing certain musical lines.

Transparency, simplicity and reliability are it's strong characteristics which is an explanation for how it sell reasonably well despite there being many cheaper options available.

The Best Acoustic Electric Guitars up to $500