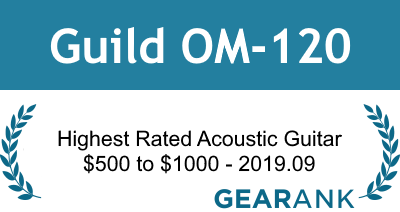 The OM-120 initially appeared on our recommended list for Acoustic Guitars Under $1000 in September 2019.

In March 2020 we created a guide dedicated to Acoustic Guitars Under $1000 and the OM-120 has been on that list from the first edition up to this day.

There's just something about the quality of Guild guitars that make them sought after, even by artists who aren't their endorsers.

A good example of which is the Guild OM-120, an all-mahogany orchestra profile body guitar.

The OM-120 features an all-solid African mahogany body, which gives it a very earthy appearance. This choice of wood works well with its orchestra (OM) body shape to give it a warm and somewhat trebly tone.

The most distinct feature of this guitar is its headstock emblem which is based on what the company used back in the '60s.

Specs and playability-wise, the guitar does not steer too far away from familiar territory, with its vintage-profile 25.5" scale C-shape neck, topped with a fretboard crafted from Indian rosewood.

Note that the nut width is a bit wider than normal at 1.75", but it is still within conventional territory, especially among OM style guitars.

While most guitarists are happy with its warm tone, some feel that that the bottom end is a bit lacking, but this is to be expected especially when comparing with bigger guitars like dreadnoughts and jumbos.

It's slightly wider nut can be a deal breaker for some, but getting familiar with it is not too hard given the quality of the neck.

With the Guild OM-120, you're getting premium all-solid wood specs at a more reasonable price tag, highly recommended.

At publication time this was on our recommended list for The Best Acoustic Guitars Under $1000.

The Best Acoustic Electric Guitars up to $1000