You might be thinking: "Oh no... not another Strat", but do hear me out. The AZES31 is a fun little roadster not too dissimilar from a car-named guitar from the past...

I remember my first electric guitar. It was a really cheap Strat copy with a maple board and a blue burst finish. I remember getting it and putting in so many hours learning how to play. At some point I got curious and started tinkering with it by moving the saddles up and down, messing with the intonation even though initially I thought that the saddles moved back and forth to adjust the tension, and much more. Later on the guitar just started feeling worse as I changed string gauges without knowing what it does to the neck. I was struggling with microphonic feedback during my first few gigs.

I only had that guitar for around 6 months before I sold it to a friend and bought a Made In Japan Gibson SG copy that I eventually sold as well, thus beginning the seemingly never ending cycle called Gear Acquisition Syndrome or GAS. I remember that Strat copy starting out really good but as I got better, the faults and deficiencies became more apparent and the guitar felt like it didn't "grow" with me as a player. 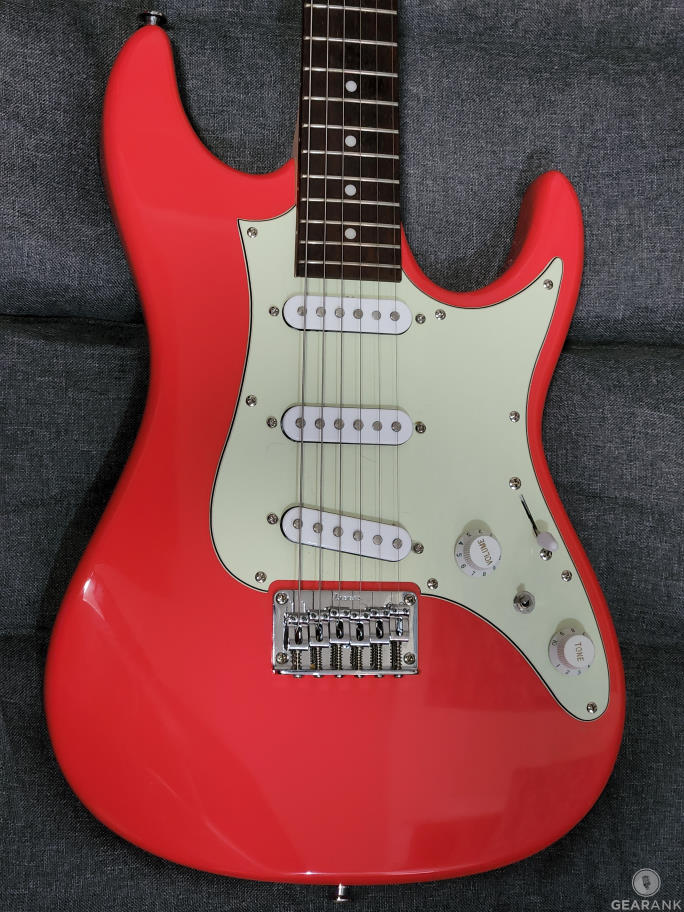 At first glance the Ibanez AZES31 looks like another variation of the Strat archetype. Ibanez made it a point to address a few comfort issues for beginners by shortening the scale length and developing a new bridge that focuses on playing comfort.

I wondered for the longest time if other people who had a limited budget like I did back then still struggle with getting a good guitar at a good price. A good guitar that didn't necessarily perform beyond the price point but had as few "frustration points" as possible. Compared to when I started out, there's a lot more knowledge on how to set up and maintain electric guitars readily available on the internet now. Only the least tech-savvy learner would miss important details about guitar set up and maintenance these days. That's why it's important that people new at the instrument get one that works great. 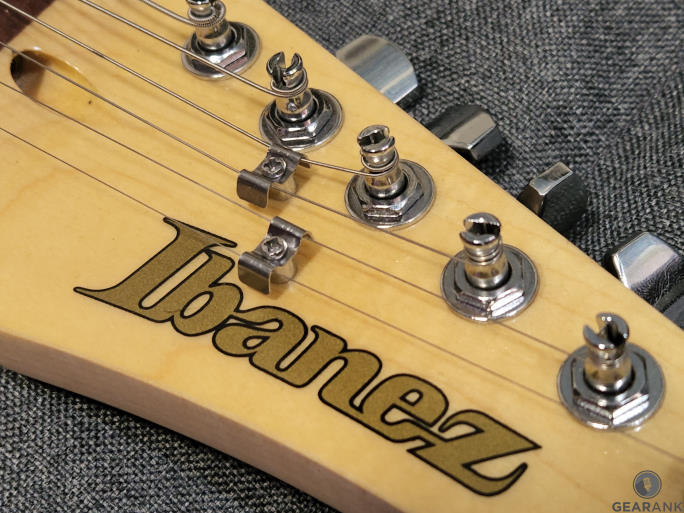 Ibanez chose to put modern sealed tuning keys with a slotted peg similar to the "kluson" style. I believe this was a good move since this type of peghead feels the most stable and secure for tuning in my experience. It also makes string changes faster, just short of full locking machine heads.

This seems to be where Ibanez positions their new AZ Essentials line. If you're not familiar with the nomenclature of Ibanez guitars, it usually refers to the body shape first (In this case the AZ), followed by a sub-class for the body shape ("ES" for essential but others include "IR" for Iron Label, "IX" For Axion Label etc.) and the model number. I won't get into more specifics from this point because it will get confusing.

Model number geekery aside, the Essentials line was designed in tandem with Berklee College of Music Associate Professor, Tomo Fujita. The goal was to make an affordable electric guitar that a student can learn on without compromising function, playability and tone. It is intended to be a line of instruments that "grows" with the student. 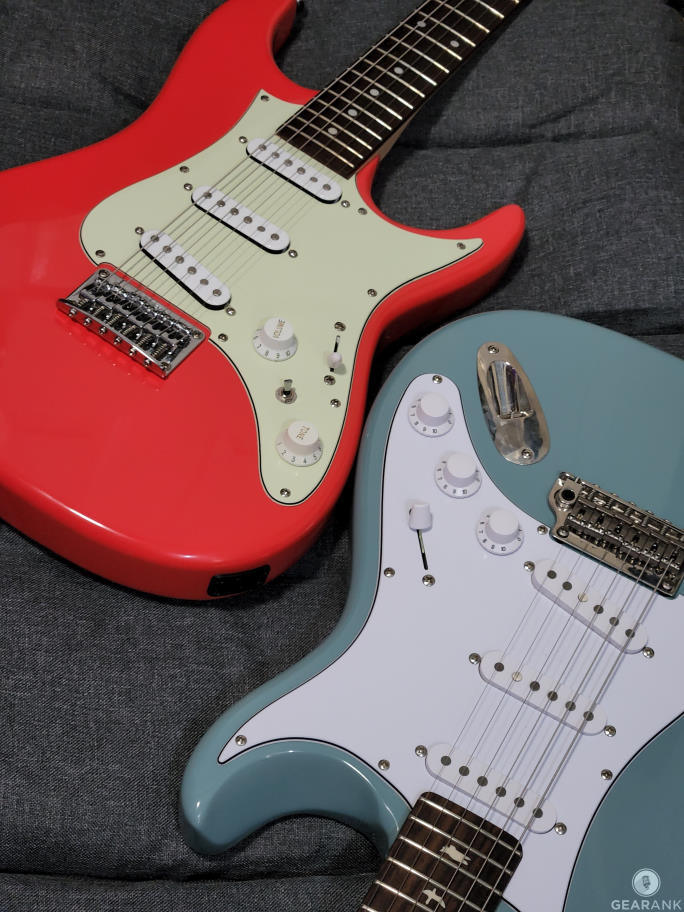 Teacher and Student: The Ibanez AZES31 might actually be a signature guitar in disguise because it was designed in cooperation with Tomo Fujita; and developed with his experience teaching guitar at Berklee College of Music. Pictured alongside it is one of his students' own signature guitars, John Mayer's PRS Silver Sky.

The scale length is a PRS-like 25" scale, which is a departure from the typical 25.5" scale lengths of the typical "S" type guitar. I deduce that this was meant to give younger players an easier time adapting to the guitar strings' tension. The body itself is slightly smaller and thinner than your average Strat. In essence, the guitar reminds me of how Fender Mustangs were positioned as a student line with their thinner body and shorter scale.

I'm far from a beginner but I've always been a fan of short scale guitars like the Fender Jaguar and Fender Mustang. So when the AZES31 was announced, I knew I had to give it a shot. I was also in the market for a single coil guitar and what made me cave in to the purchase was the fact that it had a very uncommon feature for Strat type guitars: It was a hardtail.

Hardtail Strats were made as an option back in the 50s and well into the 80s. This configuration, however was fairly uncommon as many found the trem (or vibrato, however you want to call it) a premium feature. Nevertheless, Hardtail Strats have found their way into the hands of musicians like Robert Cray and Nile Rodgers. The latter of which is an influential figure in funk music, which also happens to be the genre of music Tomo Fujita is most known for. 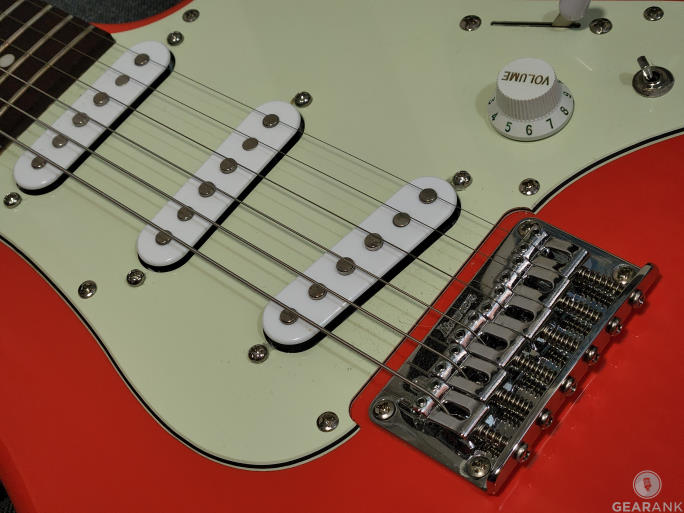 The SSS configuration is a perpetual classic for electric guitars since the 50's when the Fender Stratocaster was launched. The AZES uses 3 ceramic single coils that are surprisingly vintage-voiced.

The AZES31 is an incredible guitar for rhythmic guitar playing. The pickups have ceramic magnets but somehow sound and feel less modern and more vintage. This makes it perfect for muted chucking and tight clean interludes. With a little bit of gain, the pickups take on a lot of attitude thanks to their output. The tone reminds me of a more muscular mid-60s Strat because of the midrange push as opposed to glassier late 50's and early 60's examples and scooped late 60's sounds. The pickups don't have the harmonic complexity or clarity of vintage and aftermarket examples but that's not what it aims to be. Because of the output versus vintage pickups, the noise floor is a bit lower which helps people who are still figuring out what they want to play to be able to crank the gain up a bit from time to time. For heavier styles though, Ibanez offer an HSS version.

The hardtail bridge, designed by Ibanez to maximize player comfort has no protruding grub screws. It's not something a vintage purist would approve of. However, it's a great design choice if you're just starting out on guitar and want a comfy bridge to rest your hand on, or if have shied away from vintage style S type guitars because of how the grub screws have the potential to injure you (which has happened to me several times across different guitars!). 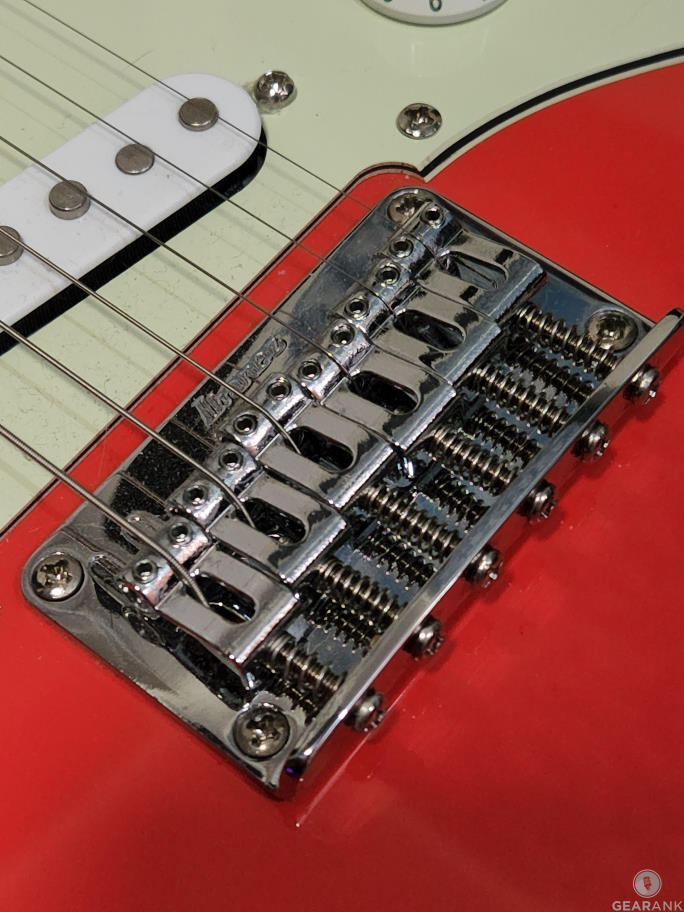 A closer look at the bridge shows that the grub screws don't jut out of the saddles unlike vintage style saddles. While Strat purists would argue against this, the AZES31 wasn't designed to appeal to them and this is a very welcome change to the 6 saddle style.

The shorter scale also encourages easier chording for fast changes. While you may think that short scale guitars are for students, there is merit to using them. You can use thicker strings to get a beefier tone without sacrificing playability. People with shorter fingers also benefit from the scale length. The neck profile is a C shape which was uncommon for Ibanez Strat and Superstrat style guitars until the AZ series was introduced.

And if you're not convinced, there is literally an entire cult following for short scale guitars in alternative rock, indie, punk and grunge scenes.

Other features include a toggle switch that puts the bridge/middle or neck/middle pickups in series to simulate a humbucker as well as a proprietary one piece output jack design to avoid lost nuts and loose cables. 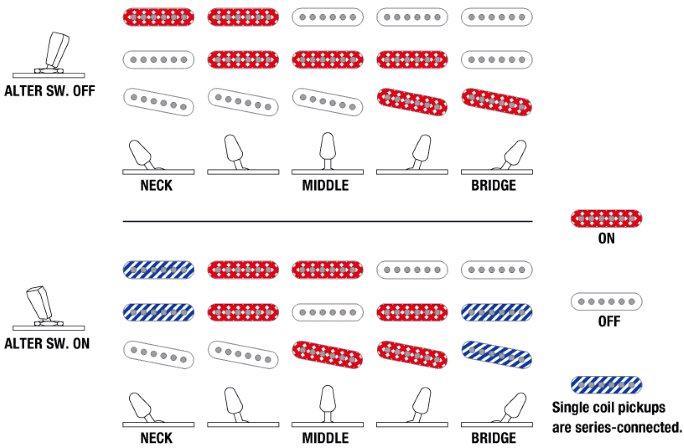 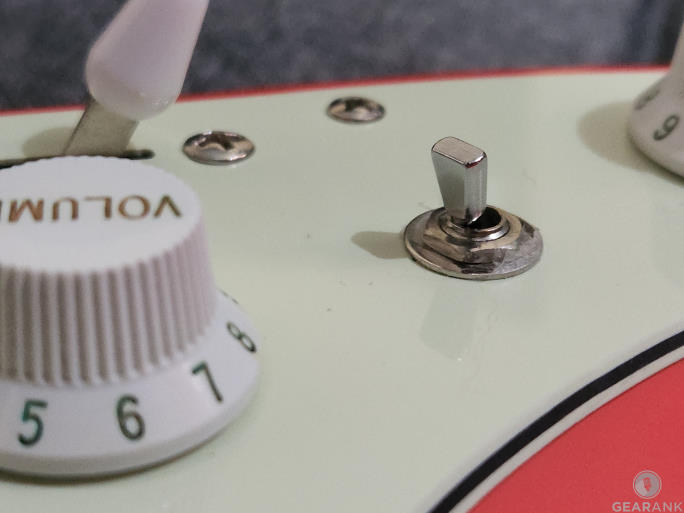 The 10" radius Jatoba fretboard is home to 22 medium frets which feel slightly more substantial than other medium frets I've tried. The fretwork on my unit was finished well with no sharp edges. I was able to set it up to my standard 1.2mm action with no fret buzz. As is the nature with guitars at this price, it is best to have your guitar professionally set up for you if you don't have the time to learn how. There are resources online but a professional can do other services like fret leveling and polishing if need be.

I didn't find any cons to the guitar unless I put it up against guitars costing much much more. This is where the setup becomes crucial as most of the guitars at this price point do not come set up well at the factory. Retailers do a "general" setup most of the time but it's best to have it according to your preference. I usually reserve judgment on a guitar until after it's set up properly. I love short scale guitars but others might not so that may be a deal breaker for people looking for a standard Strat scale length. 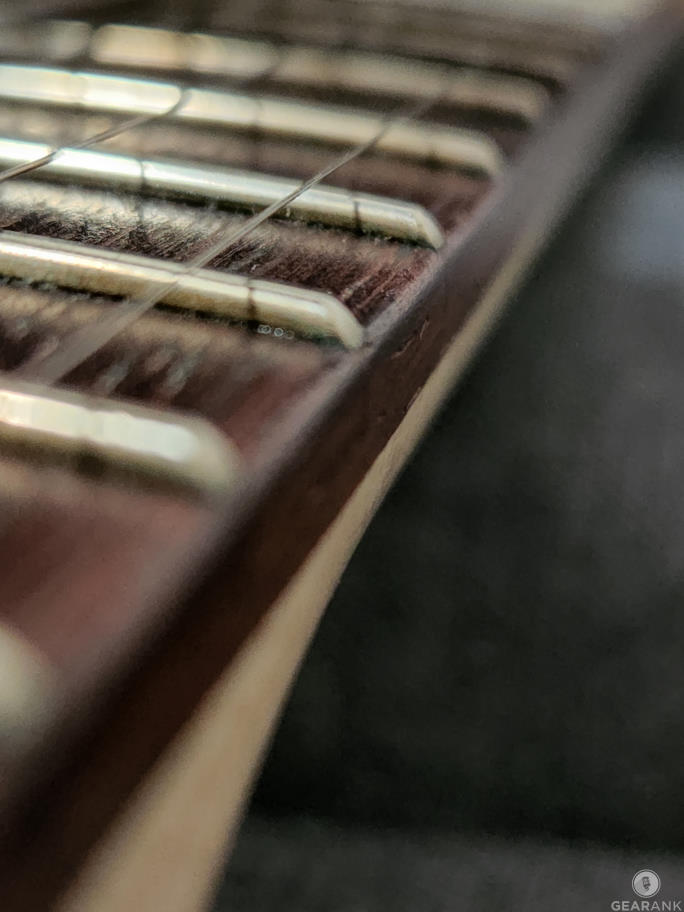 For a "beginner guitar", The Ibanez AZES31 has surprisingly decent fretwork with no harsh edges or lifted frets on my unit. At this price point, expect some variance but it's nothing a good professional setup can't fix.

In essence it reminds me of how the Fender Mustang was a parallel to the Ford Mustang, itself a smaller "pony car" version of more powerful muscle cars of the time. With that parallel, I can make comparisons to how Japanese auto manufacturer Toyota offers a top tier Sports car in their Supra model but also offers a car priced more affordable (relative to their flagship) in the form of the Toyota 86. Like the 86, the AZES31 is a fun guitar that isn't meant to provide you all the premium bells and whistles of a luxury guitar.

*All recordings cycle through the same pickup configurations: Neck, Neck/Middle, Middle, Bridge/Middle, Bridge, Neck/Middle Series, Neck/Bridge, Bridge/Middle Series. Clips were recorded with the AZES31 to an Orange Brent Hinds Terror Amplifier and Laney Cub cab and then Miked up with a Lewitt LCT 440 Pure Condenser into the Universal Audio Volt 2 audio interface. No additional processing was used.

The AZES31 is an example of a guitar designed around a purpose and target. It's not meant to be the greatest tone machine and it doesn't pretend to be. It's more of an instrument that gets out of the way of growth for new players and provides experienced players like me a fun little guitar to be inspired by.

The Best Electric Guitars Under $1000