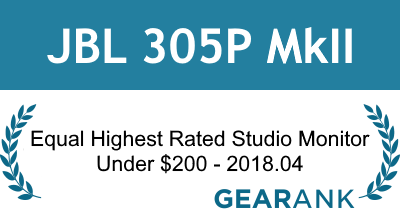 I personally use a pair of these in my studio and I'm currently recommending them in our guide to The Best Studio Monitors.

JBL won a recommendation from us with the 2nd iteration of the 305, carrying over its best features while mixing in improvements that include improved transient response and linearity, new boundary EQ controls to reduce environment-induced low-frequency anomalies, and improved enclosure material (15mm MDF).

At its core is JBL's 5" woofer and 1" tweeter, with JBL's proprietary Image Control waveguide that allows for easier sweet spot positioning.

The JBL 305P MKII's strong point is its sound quality, which many consider as incredible when considering its price point. Many users specifically mention its highs and midrange to be very life-like, and they report that it helped them hear nuances that they were not able to with their old monitors. The speaker's build quality also gets a lot of thumbs up.

Some users complain that the low-end is lacking, but given its small 5" woofer, this is to be expected. There are also a few who note that it distorts when pushed hard, but this is more of a physical limitation than a problem.

If you're looking for a great value studio monitor that performs well even in untreated rooms, the 305p MKII is a good choice. Low end may be lacking but in rooms with less than stellar acoustics, a conservative low-frequency output prevents unrealistic low-frequency projection.

I personally use a pair of these in my studio and I'm currently recommending them in our guide to The Best Studio Monitors.

They're good! My only point is that they're a bit noisy when there's no sound going on. It's pretty low but still somewhat audible. It probably comes from the built-in amp, since they're active speakers.
Other than that I don't regret buying them at all. I've been using these as my main speakers for over two years now. I'm satisfied!