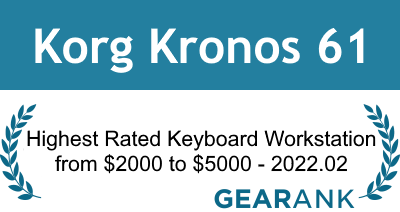 The Kronos 61 appeared on our recommended list for Keyboard Workstations Between $2000 and $5000 when we published the first edition back in March 2018.

It has had the highest rating in its price category ever since, which means it has also out-ranked its bigger 73 and 88 key siblings.

It came off the recommended list in September 2022 due to a lack of availability.

Unfortunately this has been discontinued, however you can see excellent alternatives in our guide to The Best Keyboard Workstations.
*Displayed values are prior to the Gearank Algorithm's adjustments it makes when evaluating the source.

It also provides real-time controllers, such as Korg's 4-way Vector joystick, a responsive ribbon controller, and a tap-and-drag color TouchView display for a more intuitive and hands-on control.

Its nine sound engines provide a huge collection of presets for a number of possibilities of combining different sounds.

It also has a sequencer that can record up to 16 MIDI tracks and 16 audio tracks.

Unfortunately this has been discontinued, however you can see excellent alternatives in our guide to The Best Keyboard Workstations.