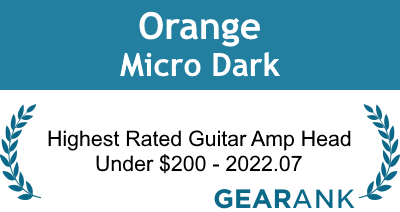 On November 22, 2022 we announced the results of our annual analysis of guitar amp brands - Orange ranked #4.

The Orange Micro Dark is a Hybrid Solid State/Tube head rated at 20W. Is it a toy or a serious tool for serious musicians?

Once upon a time, I was watching a local gig and saw a band set up. They had two guitarists; One was using the in-house 2x12 combo amplifier while the other was using his own Orange 2x12. As they were putting their gear on stage, I was wondering what the other person's amp would be like. Would it be an Orange Rockerverb? Or considering that many other amps play well with the Orange 2x12, I was speculating that it would be a 5150.

He takes out a small metal object from his backpack and places it on top of the cab.

"No way" I thought. "There's no way he's using that small practice amp." 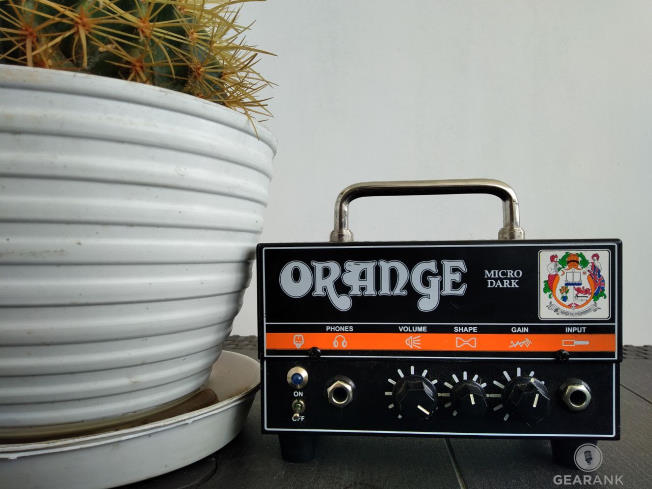 “All in all, the Orange Micro Dark is one of the best value purchases I've ever made”

He plugged it in as they started their sound check and what I heard next surprised me. It was LOUD. They played the entirety of their set with that little amp keeping up with the other guitarist. Not only was it loud, it sounded REALLY good. They were playing hard rock/blues and I always thought you'd need at least a 50W tube amp to sound good on stage. I asked him about it and found out that it was an Orange Micro Dark. I had to have it.

I went home that night and the first thing I did was look it up. I was expecting it to be a bit more expensive than their other offerings considering the power and size.

I was surprised to see that it was affordable and at 20W I thought it would be a lot quieter considering the volume difference between solid state watts and and tube watts. For the uninitiated, tube amps sound louder at the same wattage because the tube amps are designed to be pushed beyond their power rating for more saturation. Most solid state designs are designed to operate around their clean ceiling as solid state clipping is nowhere near as good sounding as tube clipping, hence a 20W solid state amp will run quieter than a pushed 20W. 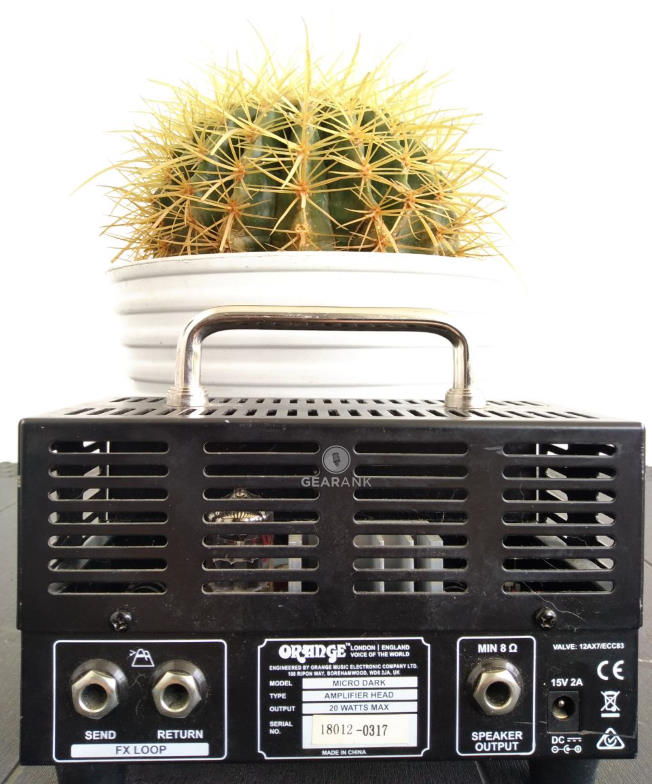 Figure 2: The Orange Micro Dark's rear view and outputs as well as its effects loop.

Not in the case of the Micro Dark, however. It was keeping up with a 50W 2x12 tube amp fairly easily. Ade Emsley, one of Orange Amplifiers' big-brained thinkers somehow found a way to squeeze (no pun intended) more volume out of a solid state power amplifier without harsh sounding clipping.

How close? Luckily, I also own an all-tube Dark Terror. Listen to the comparisons below:

Unfortunately, at lower volumes, the Micro Dark sounds flat and lifeless. This is probably because the solid state amp's final frequency response at the output was made to match a Dark Terror at loud volumes. The thing with tube amps is that the tone changes throughout the range of the master volume. The power tubes saturate as you go up, leading to a more harmonically rich sound. The Micro Dark, being solid state, seems to be only tuned to sound a certain way at a certain volume.

There is a way to make it sound decent at bedroom volumes however. The "Shape" knob is a combination of an EQ and a contour control (as seen on some Marshall amps) that shifts the tone from dark to bright. If it starts getting too dull at low volumes, raise the shape control to brighten it up a bit. If it's too harsh at high volume, turn it down and get a little more roundness back as well as some lower midrange thump. Very intuitive.

Others might feel that the lack of a typical EQ can be seen as a minus. Personally, I like the pedal-like simplicity of a singular tone control. I often found myself going towards both extremes depending on the genre I play. 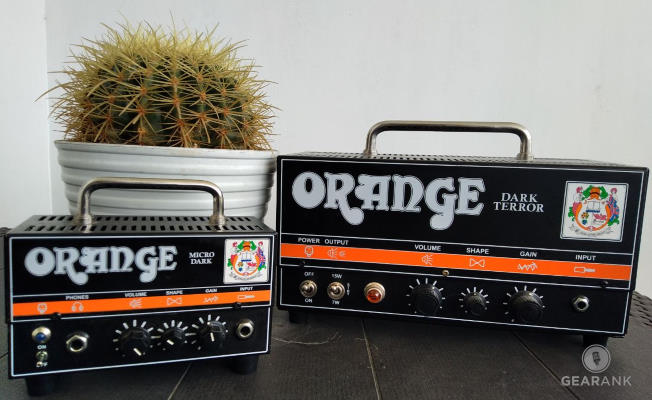 Tonewise the Micro Dark's gain range can take it from sparkly clean, to blues grit, all the way to modern metal. This came as a surprise considering the amp is often marketed and reviewed as primarily a "Metal Amp". The cleans were chimey and clear with a Strat and have a decent amount of headroom although it might struggle with loud drummers at this point.

Once the gain is cranked up, you get what the Micro Dark is advertised for: crushing gain. While not as tight as anything from the 5150 ballpark or as fat as anything Mesa, it has this distinct growl and sizzle with an emphasized midrange. This is great for followers of modern metal and rock tones where the midrange is actually emphasized instead of scooped.

I didn't get to use the effects loop as much though the times that I did use it, it worked as it should without any major "tone suck" problems.

The headphone output is probably its weakest link. I'm not quite sure if this is a cab emulated output but it's nowhere as good as a miked tone. It might be useful for late night practicing if you have no other alternatives though.

All in all, the Orange Micro Dark is one of the best value purchases I've ever made. It's a fun piece of gear that I use a lot for both rehearsals and recordings and has the potential to be a main amp for smaller gigs with less overall stage volume. It has a very satisfying gain range as well as a great approximation of the tube feel often found on its larger sibling, the Dark Terror. It does a decent job at doing what the Dark Terror does best and the only reason you'd want a Dark Terror is to have that last bit of volume and saturation thanks to the output tubes and Terror trademark power amp saturation. 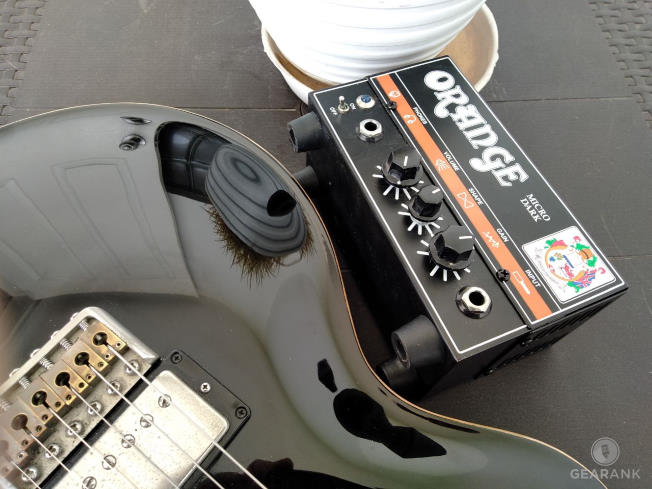 The volume level it gets is surprisingly loud enough to keep up with a moderately loud drummer. I like how the simple controls make it easy to get a good tone up and running. The gain control offers everything from gritty clean to full-on doom. Though I don't use it as much, the effects loop is a blessing for players that use delay and modulation after the distortion stage.

The Shape control, while intuitive, leaves much to be desired for fine tone shaping. The amp, like its larger sibling, the Dark Terror, only has a single channel. This means that you will need to ride the volume knob to get cleans. Unfortunately, if you have a noise gate, that method will not work. The headphone out is subpar in my experience but including a way to load Impulse Responses might go against the amp's apparent design philosophy of simplicity.

Get it if you want a small amp for rehearsals, recording or as a backup for gigs. It's more than just a toy that you play with a few times and forget. I've had mine for 3 years and I still find use for it. Click here for links to the Retailers we recommend.

The Micro Terror is a good alternative if you don't want that much gain and have a more "classic" sound. The Dark Terror is another option if you have the extra cash to spend.

Here's a video with some more sound examples and shows just how small this little amp is...