Rode
*Displayed values are prior to the Gearank Algorithm's adjustments it makes when evaluating the source.

Although we often advise against on/off switches on handheld mics, the Rode M3 does have an off switch, the same switch can also be used to engage a high-pass filter kicking in at 80Hz to reduce the proximity effect if you like to sing with your lips on the mic - and the switch takes effort to move so you shouldn't have to worry about accidentally turning it off.

Rode initially designed the M3 to be an instrument mic, but it has also found wide use as a vocal mic and that's one of the applications that Rode list on their website for it.

It also has the option of being powered by a 9v battery so you don't need to worry about phantom power if you don't have it.

The Rode M3 also has a fool proof pad switch on the inside of the mic - it offers a 20 dB cut for using on loud sound sources.

This is quite a handy versatile microphone, and Rode will also give you an extended 10 year warranty when you register it on their website.

Some people also use this a speech recording mic for podcasts and even outside recording.

Rode build to a high standard so you should expect years of use in just about any context you'd want to use a mic in.

Although this is not currently on any of our recommended lists, you can see excellent alternatives in our guide to The Best Studio Condenser Mics. 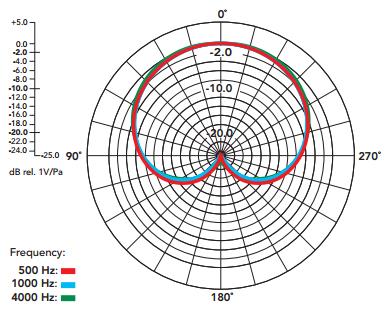