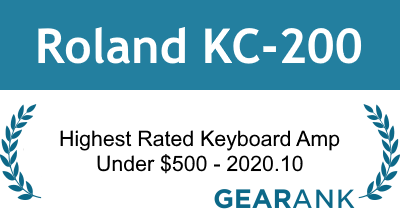 The KC-200 appeared on our recommended list for Keyboard Amps Under $500 from November 2019 through February 2021.

This was previously on our recommended list for sub-$500 keyboard amps but was removed due to a price increase. You can see our current recommendations in our guide to The Best Keyboard Amps.

This is part of the revamped range of keyboard amps Roland released in late 2017 which superseded the KC-150. Although the new range was at first slow in gaining traction in the market, the KC-200 is now getting strong reviews and its improved ratings meant that we were happy to recommend it.

In addition to a dynamic mic input for using it as a small PA, it also has a Sub Out jack which allows you to connect it to a powered subwoofer for increased bottom end if its 12" woofer isn't enough for you.

Note that it doesn't provide phantom power for the mic so it can't be used with condenser mics that require it.

It is suitable for use as a practice amp but has enough power to be used on stage as a monitor or your main amp at small to medium venues.

One thing to note is that it lacks Roland's Stereo Link feature so can't easily be used in a stereo setup.

It gets good reviews from a range of musicians using it for keyboards from practicing to small venues as well as other musicians who using the mic input for vocals and other instruments such as saxophone.

If you want a reliable amp from a company known for solid builds and roadworthy amps, then put this on your shopping list.