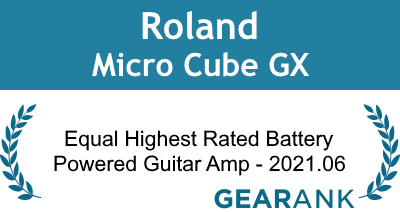 On October 18 2021 we announced the results of our annual analysis of guitar amp brands - Roland ranked #7.

The Roland Micro Cube GX appeared on our recommended list for Battery Powered Guitar Amps for 4 consecutive editions from January 2018 until October 2021 when it was removed due to a lack of availability.

It also appeared on our list for Practice Amps Under $200 for 3 consecutive editions from September 2017 until September 2020.

If you’re looking for a compact practice amp, it really is hard to beat the Roland Micro Cube GX.

It comes loaded with an amp model for every situation, and weighs in at just six pounds.

This small and lightweight amp features a 3W amplifier section that drives a 5" speaker, so don't expect it to be loud, but it does have enough volume for solo practice.

And since it can run on batteries, you can use it virtually anywhere, making it a great mobile amplifier for guitarists who are always on the go.

It also helps that it comes packed with DSP features which include 8 COSM amp models, and 8 COSM effects, which allow for a wide variety tones.

It also comes with modulation effects (though to get different distortion profiles you will have to switch between amp voicings).

The controls on the amp are as follows: amp type, effect, delay/reverb, tuner, gain, volume, tone, and master volume.

The modulation effects on the amp and its clean channels are surprisingly good for its price.

The Roland Micro Cube GX comes with an AUX-In, headphone line-out, and an emulated line-out for recording.

Roland's 'Cube Jam' iOS app has a very low rating on the app store, however this is only an add-on and not required for the amp's general operation.

If you're looking for a long term practice amp with good enough flexibility in the sub $200 price range, then this is a good amp for you.

Unfortunately this is very difficult to find new in stores these days. If you'd rather buy a new amp instead of a second hand one, then you'll have to decide which features are most important to you because there is no close analog.

These videos provide good demonstrations of the various models, effects and sounds this little amp is capable of.