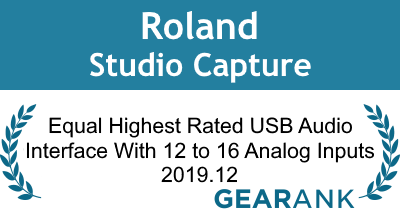 The Studio Capture appeared on our recommended list for 16 Channel Audio Interfaces when we published the first edition in November 2016 where it remained until March 2022. It has become a bit dated these days and we are no longer recommending it.

When it was released the Studio Capture was the flagship model of Roland's line of audio interfaces and it still has the highest number of analog inputs of any interface that they produce.

It has a host of input options, including 12 combo XLR/TRS jacks, 4 TRS line inputs, and 1 S/PDIF input.

The output options are equally impressive, with 8 TRS and 2 XLR outputs, and an S/PDIF out.

The same extra features are available to support the multiple input/output options, including Roland's Auto-Sens technology, and the built-in 40-bit DSP capabilities.

If you're looking for a cost effective audio interface with 16 analog inputs that you fits just as well in a large studio, desktop or even an impromptu recording session, then get the Roland Studio Capture.

*Displayed values are prior to the Gearank Algorithm's adjustments it makes when evaluating the source.
Although this was previously on our recommended list, there are now more highly rated options available which you can see in our guide to The Best USB Audio Interfaces.