I've always been curious about different guitar tones and playing feel, and this curiosity has led me to experiment with different string gauges, from the usual 9s and 10s, to heavier 11s and even 12s, which I used during my Stevie Ray Vaughan phase.

While I may still change string gauges from time to time, I have mostly settled with gauge 10 strings because it gives me good balance of string tension, tone and reliability. It is thick enough for tone improvement, without it digging into my finger and making playing too hard. Coincidentally, some of my favorite guitarists also use 10 gauge strings, including Eric Johnson, Jimi Hendrix, John Mayer and more.

Before the convenience of online shopping, my choice of string brands were limited to what's available at local stores, but this led me to discover the Rotosound R10. I didn't really seek it out, rather I ended up getting it because there were no other gauge 10 available at that time. I wasn't sure what to expect, but I ended up liking it, and up to now, it still is one of my go-to string sets, especially for my Gibson Les Paul Studio.

What enamored me to the Roto Yellow is its aggressive mid-range, which is a contrast to the trebly sounding strings that I'm used to. The thicker wound strings sound fuller to my ears, great for playing my favorite riffs and chord changes. It also rounds-off some of the excess high-frequencies of bridge pickups, resulting in a subtly warmer yet still ballsy tone, that works great for blues, rock and similar styles. The downside to its warmer tone is that some may find it sounding "dead" or "old", especially those who are used to bright sounding sets. Note that I still use bright strings, especially when I'm going for clarity and bell-like cleans, but I go for the R10 when I need to cut through a mix. 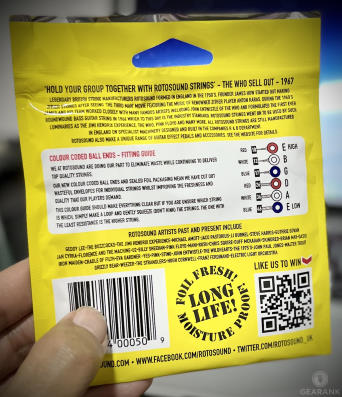 I didn't notice any playing feel improvement compared to the other 10s that I use, but I don't have any complaints either. It plays much like any of the "standard" strings that are available in the market, which is good for me because I want my guitars to have consistent playing feel, regardless of what brand of strings I use. The feel of this set is not too far off from the more common 9s, but there is noticeable increase in tension when I apply left-hand techniques like vibrato, bending and pre-bends.

In my experience, it retains fresh playing feel and tone for over 2-weeks, sometimes longer if I diligently wipe the strings after playing, and put my guitar back in its case when not in use. Note that it doesn't come with "coating" that extends string life, but in my experience, it still lasts quite long for a standard set. And since its not a trebly set to begin with, the dulling of its high frequencies is not as dramatic as it ages.

In terms of tuning stability, I don't see the R10 as being better or worse than others. After a break-in period, it reliably stays in tune as I play on stage or for practice, as long as I don't play too aggressively. It's part of my routine to tune my guitars every time I take them off their case, so tuning stability over long periods is not much of an issue to me. 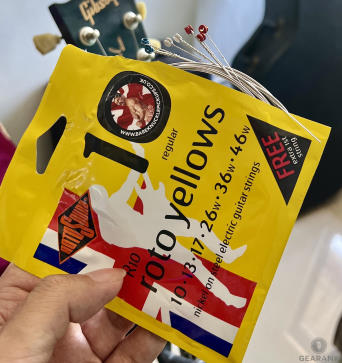 Instead of the usual paper and plastic packaging, the R10 set comes in a streamlined package with just one sealed foil pack carrying all the strings. This does away with individual packets for each string, reducing waste and packaging cost, while retaining string freshness upon opening. Its single foil package never gave me problems, probably because it is not as prone to wear and tear as paper.

More importantly, the savings they get from their simplified packaging are given back to consumers via a free extra 1st string. This freebee is another BIG reason why I keep going back to this set, saving me the need to buy another set just because the 1st string broke.

I wasn't familiar with Rotosound when I first got this set, but I soon discovered that it is a popular British guitar string brand, with a long list of big name users that include Jimi Hendrix, John Entwistle, Queen, U2, Duran Duran, Oasis and many more. One notable user of the Roto Yellows is virtuoso Guthrie Govan, so every-time I use this set, I know that I am in good company.

I am happy with the quality and tone of the Rotosound R10, and I would recommend this set to anyone who are into blues, rock and similar styles. The included extra 1st string ups its value by a lot, and more importantly, gives me one less thing to worry about.