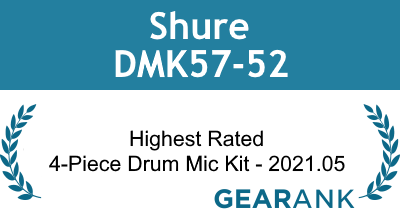 The DMK57-52 first appeared on our recommended list for 4-Piece Drum Mic Kits from June 2018 until April 2020 when it had been out-ranked by the Shure PGASTUDIOKIT4 and sE Electronics V Pack Venue.

It had high enough ratings to go back on the list in May 2021 when it ranked in the #1 position where it remains today.

The Shure DMK57-52 brings together many of their popular mics in a drum mic package that can also be considered as a good all-around stage mic kit.

At its core are three Shure SM57 mics, widely considered as an industry standard on many instruments, including the snare. These SM57s are meant for use with the snare and toms, but their reputation means that they can be used with virtually any sound source, including loud guitar and bass amps.

The fourth mic in this package is a Shure Beta 52A with built-in drum mount, it serves as the kick drum mic with its good low-end handling.

The package also includes three drum mounts for the SM57s, and a carrying case.

If you're not sure what to get, the Shure DMK57 is a safe bet.