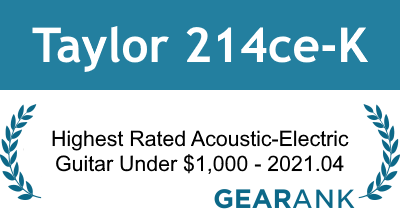 The Taylor 214ce-K appeared on our recommended list for Acoustic-Electric Guitars Under $1000 from April 2021 until August 2022 when had to remove it due to its price having been increased above the price limit for that list.

The 214ce-K is a variation of the popular 214ce from Taylor, carrying over the same Grand Auditorium shape and overall build, with the main difference being the use of Koa for its back and sides.

Koa sits somewhere in-between the focused midrange sound of mahogany and the snappy treble of maple, which gives this model a bit more midrange and high frequencies.

Everything else follows the same formula that makes 214ce a market favorite, including having a solid sitka spruce top, ebony bridge and fingerboard, Tusq nut and saddle, 15" radius fingerboard with and it comes with Taylor's Expression System 2 electronics.