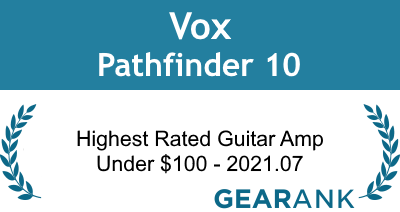 The Pathfinder 10 appeared on the first edition of our recommended list for Guitar Amps Under $100 in February 2018 where it remained until a price increase required us to remove it in September 2021.

Before that it was on our list for Guitar Practice Amps from September 2017 until September 2018 when it was out-ranked by other amps.

Vox is sought after for the distinctly clean chime tone that their amps produce, and this is what you'll get with the Pathfinder 10, albeit in a smaller format with a more practice friendly volume level.

This amp is meant to be minimalistic, no digital amp modeling, just basic 2-band EQ, gain, volume controls and two channels that you access via the Overdrive / Clean button.

There are times where you just want an amp for a particular tone or purpose, and that is exactly what the Pathfinder 10 gives you, a plug-and-play compact alternative to big Vox amps.

And since most practice amps are focused on overdriven tone, getting a compact amp with good clean tone is a welcome change for many, especially those who are fans of the Vox amp sound.

This combo houses a 10-Watt amp, and a 6.5" speaker, and it has a headphones output for quiet practice.

If you're a fan of Vox, or you're into British style tones, then this is the perfect portable amp for you.

Although this was previously on our recommended list, there are now more highly rated options available which you can see in our guides to The Best Practice Amps and The Best Guitar Amps Under $100.