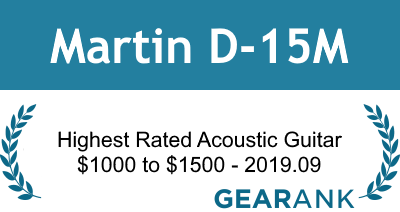 The D-15M has appeared in every edition of our recommended list for Acoustic Guitars since we first published it back in November 2016 and in every single one of those editions it was never out-ranked by a competing guitar in its price category.

We've changed the price category between $1000 to $2000 and $1000 to $1500 several times over the years but this made no difference, the Martin D-15M was always the highest or equal highest rated in its price category.

The only other guitar that tied with the D-15M for equal highest rated status was the smaller sized Martin 000-15M.

Simply put, the D-15M's extremely high ratings means it has achieved more highest ranked statuses than any other sub $2000 guitar since November 2016!

Unfortunately it's no longer on any of our recommended lists because we removed the Under $1500 and Under $2000 price categories in September 2022.

The all solid Mahogany construction of the top and body has proved extremely popular.

Although this guitar comes in another version, the D-15M Burst, this version is far more popular and more highly rated.

Artists known to play a D-15M include Chris Martin from Coldplay and Andrew Davie from Bear's Den.

This guitar has a very strong rhythmic presence, thanks to the warmth and bold mid-range tone that you get with mahogany.

Because of the dreadnought sized body, the guitar also has strong low-end response and volume to spare.

The Best Acoustic Electric Guitars up to $1000

This model is USA made fyi

Thanks for pointing this out - I've corrected that mistake.

The Martin 15 series is all made in the USA not Mexico. That is why they are so good.

Thanks - that statement has been removed.