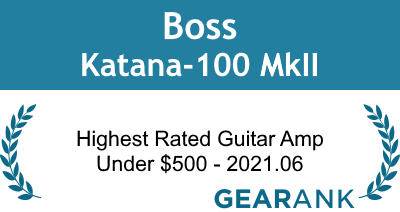 In October 2021 we published the results of our annual guitar amp brand analysis, Boss ranked #2.

If you're looking for an all-in-one guitar guitar amp that can serve you both on stage and at home, then definitely check this amp out.

The best thing about digital sound processing is that it gets better as technology improves, and this is the reason for the staying power of many popular modeling amps, including the Boss Katana line.

This version superseded the Katana-100 (KTN-100) which was the mark 1 version.

The Katana MkII line expands its amp modeling with the addition of a variation switch, which tweaks the voicing to a different flavor while still retaining the sound quality that is expected from the line. Like before, it utilizes the same DSP technology found in their guitar processors and multi-effects units, albeit packed inside an amp.

Having the ability to attenuate its output is also another noteworthy feature, giving you the option to get cranked tones at lower volume levels. You can set it to 50W or as low as half a watt. The amplifier section is paired with a single 12" speaker.

The effects are very widely well regarded in the guitarist community, which is something you would expect given that they are the same Boss effects you can find in their processors. They even increased the number of effect types for this release.

You can also edit both your amp models and effects using the BOSS Tone Studio Editor for Katana which was updated for the MKII series.