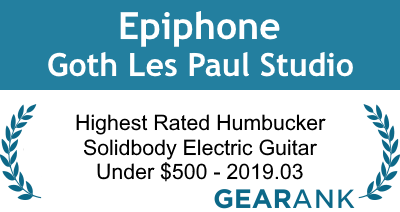 This first appeared on our recommended list for Solidbody Electric Guitars Under $500 when we first published it back in November 2016, and it was the highest rated guitar across all pickup types in that price bracket.

As this has been discontinued, you might like to look at alternatives in the humbucker section of our guide to The Best Electric Guitars Under $500.

Many decades after it was first introduced, the Les Paul is still as iconic as ever, available in a variety of versions (including clones) that cover everything from cheap to ridiculously expensive.

The Goth Les Paul was an interesting variation because there's nothing different about it on paper, other than its color, yet it still ranked higher than other Les Pauls in this price range.

The striking black color scheme of the Goth played a big role in its popularity.

It came with a tried and tested wood combination of mahogany body and neck, alnico magnet humbuckers voiced to sound like old Les Pauls, and a straightforward tune-o-matic bridge.

It appealed to guitarists who are into classic rock, while modern rock players who preferred a stop tail piece guitar also found the Goth Les Paul Studio to be an exemplary instrument.

The Epiphone Goth Les Paul is an easy pick for those who prefer a black guitar while keeping the classic look and playing feel of the Les Paul.

See the Epiphone Goth Les Paul in action below

The Best Electric Guitars Under $1000

What year was this discontinued?

We're not sure when production ended, but it became unavailable at many online stores during 2019.

Thanks for the reply - I have one from about 2007. I thought they stopped production a lot sooner than that, after I purchased it, I have never seen another one in the wild ever again!