As a long time Martin guitar owner, I'm used to their brand of strings over others. But from time to time, I do try strings from popular brands like D'Addario, sometimes out of curiosity, but sometimes because there are no other options available.

There are also times when my trusted luthier decides on which strings to put on my guitar after maintenance work. And this is how I got the GHS BB20X set installed on my Martin OMCPA4.

This is an extra-light 11-50 gauge set, which is lighter than the 12-54 gauge sets that I'm used to. It has 80/20 copper-zinc alloy windings that shape its bright voicing, and it has a hex core that come standard with many strings. So far, I'm quite pleased with its smoother and lighter playing feel. I also find its quality and tone to be on par with what I'm used to, albeit with a different brighter flavor.

As the label implies, this is a bright sounding set, and while it it bothered me at first, I have grown to appreciate its distinct voicing. It may not sound as full as gauge 12 sets, but I like how each string rings with clarity and definition. Chords and solo lines sound noticeably clearer, and have more fidelity, making practice, recording and playing solo more enjoyable.

On the flip side, I notice that my plugged-in tone is thinner, and easily drowned out when playing with a band. Thankfully, I am able to shave off some of the highs by tweaking the tone settings on my Martin's preamp system. And I ended up liking the result, because I still get the benefit of clarity and focused tone, with less of the unwanted high frequency zing. And since it doesn't have much bass, it also interferes less with the bassist. Still, it has to be said that the bright tonality of this set is more of an acquired taste, especially for those like me who are used to warmer sounding acoustics.

Compared to the 12's that I'm used to, the GHS BB20X is noticeably easier to play. Techniques like bending, sliding, hammer-on and pull-offs are easier to do, even more so when playing simple chords and single line notes. This relaxed playing feel is the main reason why I will most probably continue using this set on my Martin. The downside to its lighter playing feel is that strumming, plucking and fretting too hard on the strings may cause unwanted buzzing and even intonation issues. To avoid these, I had to be more conscious of my playing intensity and avoid going all out.

In my experience, the GHS BB20X still sounds bright and fresh after over 3 weeks of use, and this is quite a feat given that this is a non-coated set. But this longevity may also be due to me taking better care of my acoustic, because it just came from maintenance work - so take this opinion with a grain of salt. I was hoping for the set to lose some of its brightness as it ages, but to my surprise, it retains its much of its trebly tone really well.

Having been professionally installed by the team of my trusted luthier, I never had intonation and tuning issues with this set from the get-go. But it is normal to encounter tuning issues right after installation, when strings have not yet stretched enough. As they get more corroded, the strings will have intonation problems, especially at the higher frets. This is my cue to swap out the old strings. 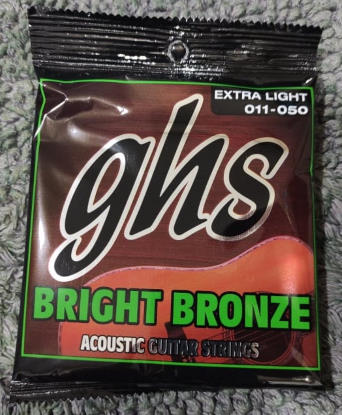 This set comes in a plastic package with multiple "Nitro Packs" that house individual strings. These nitrogen-sealed packets store the strings in an oxygen-free environment, effectively sterilizing the packets to stop contaminants from corroding the strings. These packets have a transparent side so you can peek into the strings and identify them without having to open up the packets. Since this is a new set to me, I cannot speak of its consistency, but my luthier friend trusts them enough to use on the guitars of their clients.

GHS has a long history of making guitar strings, starting way back in 1964. And along with its long history is an equally long list of artists that have used their strings - including icons of guitar music like Carlos Santana, Pat Martino, Doyle Dykes, David Gilmore and more. There also plenty of noteworthy new generation artists who use their strings, including Tom Morello, Eddie Vedder and Ola Englund, among others. Personally, I've tried GHS electric guitar strings many times in the past, because it is the guitar string of one of my favorite guitarists, Eric Johnson. But my experience with their acoustic strings are few and far between. 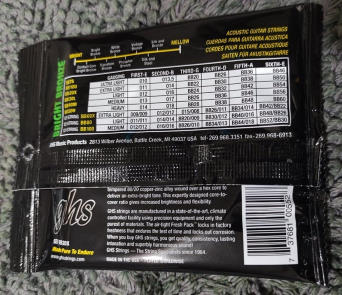 GHS mentions"core-to-cover ratio" in their marketing, they describe it as "the ratio between the thickness of the core wire and the thickness of the cover wraps". The FAQ section of their website states that: "All else remaining constant, a larger core-to-cover ratio will yield a string that feels stiffer under the fingers over one with a smaller ratio. Another benefit of a larger core-to-cover ratio is a string that can easily handle downtuning with ease, without becoming overly floppy or boomy." The GHS BB20X set in particular is said to have a "redesigned" core to cover ratio that helps increase its brightness and flexibility. Unfortunately they don't provide other details like actual measurements.

If you aren't into trebly tone, and you can't be bothered to tweak your plugged-in sound, then this may not be for you. While I'm not totally sold to its bright voicing, I'm able to get good clear tones with some tweaking. The clarity and fidelity that I get from them, together with their easy playability, are good enough reasons to to give them my thumbs up.