After fiddling with his grandpa's old Yamaha PSR-E323, my then 10 year old son ended up learning to play the main theme of Fur Elise. And he did so with just the built-in tutorial features, without help from anyone else.

His curiosity soon developed into passion for playing and learning, and as such, he needed a beginner-friendly keyboard. So after much research, I ended up getting him the current generation model of his grandpa's keyboard, the Yamaha PSR-E373. And now, after more than a year of use, I'm still happy with my decision - it is as good, if not better than the old keyboard that jump started my son's musical journey.

The PSR-E373 is part of Yamaha's long running PSR line of portable keyboards. It has 61 synth style keys with touch sensitivity, packed with over 600 voices, along with multiple rhythms and effects. What sets it apart from its predecessors is its improved sound processing, and the use of better sound samples - some of which are taken from more expensive models.

All these sounds are directed towards two 4.7" speakers, which are loud enough for practice and classroom settings. While it can be powered by a 12V DC power supply, it can also run on six AA batteries, allowing for untethered use. More importantly, it comes with built-in lessons that teach students how to play a wide variety of songs, from kid friendly tunes to classical pieces. 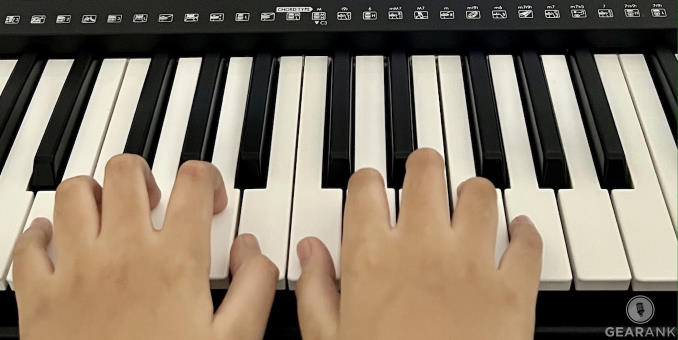 The keybed doesn't stray from standard piano size, so there's no need to adjust finger positioning when playing on stage-ready keyboards or an actual piano. But there is a big difference in playing feel, because this one has a lighter "synth style" action. The keys have uniform weight and are easy to press, making for a more relaxed playing experience. Most young musicians, including my son, prefer this softer feel over the weighted feel of an acoustic piano.

As expected in its price range, the keys are made of plastic, and since it is synth style, the underside is trimmed to make them thinner and lighter than traditional boxy keys. The downside to its lightweight design is being prone to damage, which is why careful handling is important. It is also worth mentioning that it has just the right depth - the keys don't press in too deep or too shallow.

Also called velocity sensitivity, this feature adjusts the volume of the note you're playing in relation to how hard you press the keys. This results in more control over dynamics. There are 4 different velocity settings available, Soft, Medium, Hard and Fixed. My son and I are content with the default medium setting, we can really hear the dynamic differences as we lighten our key presses, and as we pound on the keys.

Those who does not want too much sway in volume will appreciate the Soft setting. Hard setting is meant for those who are used to playing acoustic pianos and weighted keybeds. Fixed setting disables touch sensitivity altogether, much like how old synths behave. Note that there is a "Touch" graphic on the screen which gives you visual feedback on how soft or hard you are playing. Unfortunately, the graphic doesn't accurately match the sensitivity of the keys, especially when doing soft presses. This is a good kind of bad though, because the keys are actually more sensitive than the visual cue suggests. For the price, the Yamaha PSR-E373 has good touch sensitivity, comparable to more expensive keyboards that I've tried. 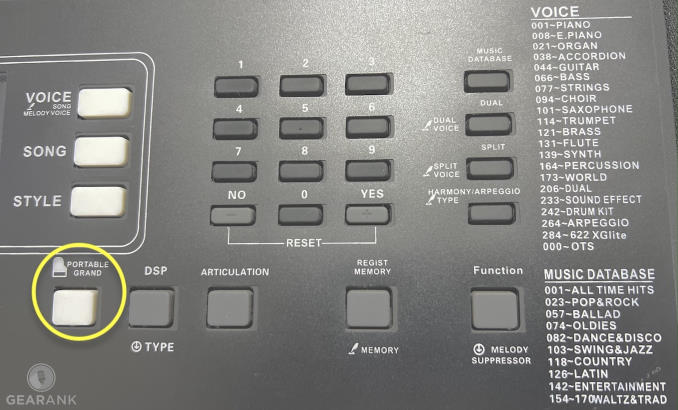 The main advantage of the PSR-E373 over its predecessors is the use of voices and samples that are taken directly from the their former flagship Tyros line. And because of that, there was a lot of hype about its sound quality being better than more expensive keyboards from other brands. Thankfully, the hype turned out to be real - the main voicings sound great, especially the grand piano sound which is sampled from a very expensive Yamaha CFX concert grand piano.

Since my son is into classical pieces, and is taking piano lessons, having a good piano sound is really our primary concern, and so far, the PSR-E373 has not disappointed. Yamaha is so confident of the grand piano sound that they added a "Portable Grand Button" that can be used to quickly get back to main voicing.

While it does have quite the flexibility with over 600 voices, some of the voices are actually effect sounds that are meant for multi-media production - not music. There are also some voices that sound dated in terms of sound quality, but still usable. Thankfully the ones that actually matter for making piano and keyboard music are good, including variations of piano, electric piano, organ, strings and more. All in all, I am pleased with its sound quality.

There aren't that many connectivity options, but it does provide essentials that include a 1/4" port for plugging in a sustain pedal, a 1/4" out for headphones and a 1/8" aux input. So far, all these ports are holding up well, with no issues whatsoever, although only the sustain pedal input really gets used most of the time.

The unit also comes with a USB port, which is quite special because it allows the keyboard to serve as an audio interface. When plugged in to my laptop, I can do direct recording without any hiccups or driver issues. I can also route the audio output of my laptop to the keyboard speakers, which is quite convenient - no more need for an extra audio cable to connect to aux input. With the right USB adapters, direct audio recording will also be possible via smart phones and tablets. I should mention that the recorded audio via USB will be affected greatly by the touch sensitivity setting - which means that the volume will be substantially lower when you play the keys softly. 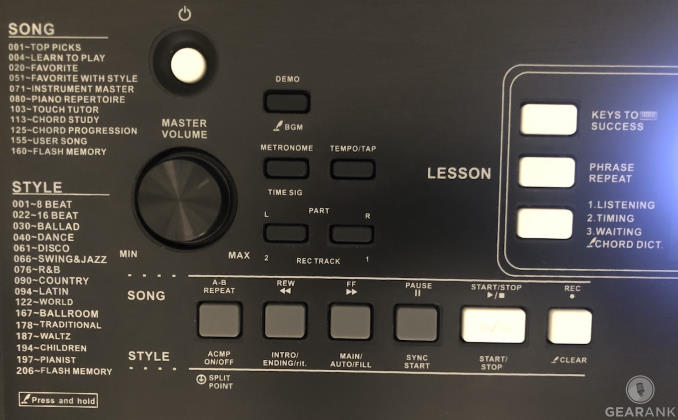 The Song section is where you can access the keyboard's built-in lessons, including breakdowns of popular piano standards, classical pieces, nursery rhymes, pop songs and more. This is the feature that my son used to learn Fur Elise on his own. It has controls for phrase repeat and for adjusting tempo, which helped my son focus on sections that he is having a hard time with. There's even a lesson that teaches students to control how light or heavy they are hitting the keys. Other lessons include chord study and chord progression. Note that while these built-in lessons are helpful, it still won't beat having a good tutor. Speaking of tutors, this keyboard is tutor and student friendly - it has a metronome with tap tempo, and a built-in chord dictionary. It also has a headphones output for quiet practice. Unfortunately, it doesn't have twin headphone outputs which would be great for tutors to also listen in.

The Yamaha PSR-E373 is an arranger keyboard, and as such it comes with rhythm and auto-accompaniment features. Style adds an instant "rhythm" section to your playing, this includes drums, percussion and bass arpeggios that are based on your left hand playing. There's a wide selection of Styles to choose from, so you can play whichever style you want. It even has controls for intro/ending and autofills.

This keyboard comes with 170 pre-arranged songs in its Music Database. It gives you access to a wide selection of popular songs from various styles including rock, pop, jazz, disco, country, latin, traditional and more. There are even contemporary songs thrown in there that my son is familiar with. Note that proper use of Style and Music Database requires more experience with arranger style playing, so don't expect beginners to jump in and play with these features straight away. 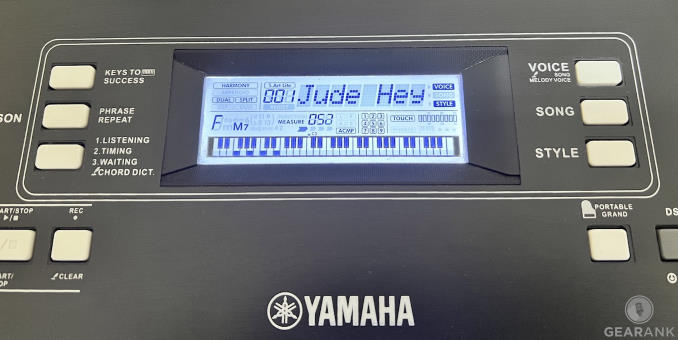 The centerpiece of its interface is a backlit display that shows quite a lot of information, including which keys you are pressing, how much pressure you're applying. It can also show the chords you are playing with your left hand, which can also be used for teaching chord formation. The display shows other settings like the voice, style and song you are using. The display also shows beat counting that matches the metronome, a feature that is very useful for practicing.

The buttons are spread nicely across the front panel and don't feel cramped. But be warned that the buttons feel soft and are not as tactile as I hoped. For me, the quality of the buttons is the main weakness of this keyboard. Thankfully, all the buttons are still working fine after a year of use, it is proof that the buttons are durable. Another minor annoyance for me is the need to press the "Function" button many times to cycle through the many settings and parameters of the keyboard, thankfully there is a way to save your settings and quickly load them up when needed. Since this is designed with pianists in mind, it does not have wheel or stick controls for pitch and modulation.

It is made mostly of plastic, which is understandable given its price. But it feels solid and looks well built, not as flimsy as I was expecting. Still, being solid is not an excuse to just drop or throw this around. On the plus side, being made from plastic made it very light, making it easy to move around and transport if needed. After a year of use, it still works just as well as when we first got it, although it now has a few dirt, dings and scratches.

The accessories you will be getting, or not getting, will depend on the retailer. Make sure that you get a power supply along with the keyboard, be it bundled or by buying it separately. It is a good idea to get a sustain pedal right at the start, because it is an integral part of keyboard control. Getting a keyboard stand is also important, especially if you don't have a good table to put your keyboard on to. Also consider getting the necessary cables, including a 1/8" aux cable, 1/4" cable for plugging into an amp and a compatible USB cable (Type B going into the keyboard). I decided to pay a bit more to get all these accessories along with the keyboard, so my son is able to fully utilize the keyboard right at the start.

The Yamaha PSR-E373 has exceeded most of my expectations, and it truly is instrumental in developing my son's playing and love for music - definitely worth getting.