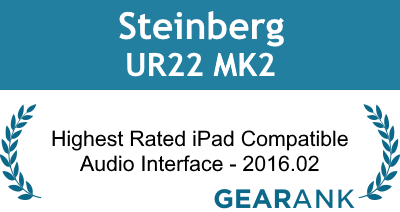 The UR22 MK2 appeared on our recommended list for iPad Audio Interfaces when we first published it back in February 2016 and was there until May 2018. It reappeared from October 2019 until October 2020 when it was out-ranked by other interfaces.

It also appeared on our recommended list for Cheap Audio Intefaces from May 2017 until October 2020.

With Steinberg's expertise in DAW software development, it is not surprising to find that their audio interfaces are highly regarded. The UR22 MK2 is a 2-channel (2-in/2-out) audio interface with hardware and DAW compatibility being its strong point.

Complementing the preamp section is the unit's high-quality analog to digital converter, with up to 192kHz sampling rate at 24-bits.

To connect with the iPad, it comes equipped with a CC (Class Compliant) mode and an additional USB mini socket to draw power from (since it cannot draw power from the iPad). All you need is Apple's Lightning to USB adapter and you can capture audio right on your iPad.

Note that like most USB interfaces under iOS the Steinberg UR22 MK2 will require a 5V USB power hub to be connected.

Other features include "Loopback" for streaming performances live while recording, MIDI in/out and zero-latency hardware monitoring.

While it is specifically designed to work with Steinberg's Cubase, and it comes with Cubase AI, it's right at home with all the other DAWs, including Audacity, Pro Tools, Logic Pro and many more.

If you need something physically sturdy that you can bring throughout a tour, a mobile or field recording setup or just something you can bring to a friend's to jam with, the Steinberg UR22 Mk2 is a good pick especially with the bundled software included.