Taylor continues to roll up their sleeves in the entry to mid-tier market with the Academy series, featuring smaller scale acoustics built to meet the brand's reputable quality standards.

The Academy 12 is part of this line up, sporting a Grand Concert body that's similar in size to classical guitars, albeit with a shorter 24.8" scale length. This body shape is known for its warmer tone, but it is balanced nicely by the bright tonality expected from its solid sitka spruce top. The back and sides are made from layered sapele, which is a type of wood similar to mahogany. All in all, the body follows familiar tonewood builds, the main difference being Taylor's high build quality standards. 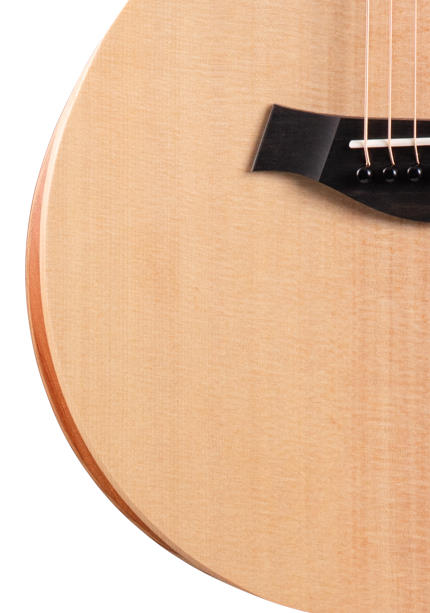 Taylor equipped the Academy 12 with a beveled armrest, which allows for a more natural and comfortable positioning of your picking arm. While this is not a novel feature, it is quite special given that this is part of Taylor's student-friendly and affordable line of acoustics. The obvious beneficiaries are young students and novices can have an easier time learning correct posture right at the start. Experienced musicians will also benefit from the combined comfort provided by its smaller and rounder Grand Concert body and the beveled arm rest.

The body is joined with a slim maple neck, topped by a 24.8" scale ebony fingerboard. This blends well with its narrow 1.6875" nut width, resulting in easy playability, especially when compared with regular acoustic builds. The guitar has a TUSQ nut and Micarta saddle, and it has an ebony bridge that matches the fretboard.

While it does have a 3-ring wood/fiber rosette, it doesn't have much else in terms of cosmetics. It sports a streamlined look that is expected given its price. Taylor wrapped this guitar with natural varnish finish, which protects the guitar while showing its natural wood grain, and allowing for good resonance. Finally, it comes bundled with a Taylor branded gig bag, which looks quite nice.

At the time of this writing, this guitar is priced at just under $600, which is quite high for an entry level guitar, but is still reasonable, given its solid spruce top and Taylor brand quality.

The other main variant of the Taylor Academy line is called the Academy 10, which is a smaller, short scale version of the popular dreadnought body acoustic. Both the Academy 10 and 12 have acoustic-electric versions that come with Taylor ES-B electronics, and the series also caters to left handed players with their left handed versions. This is a big deal especially since not a lot of manufacturers have specialized beginner friendly left-handed guitars.

*Displayed values are prior to the Gearank Algorithm's adjustments it makes when evaluating the source.
See our Current Recommendation