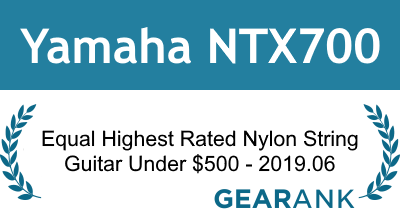 This was on our recommended list before it was discontinued by Yamaha.

A good alternative is the Cordoba GK Studio Negra which is another highly rated crossover / flamenco style nylon string guitar, although it does cost more as most guitar prices have gone up over the last couple of years.

You can see our current recommended list in our guide to Classical & Nylon String Guitars.

The Yamaha NTX Series have the scale length of a Classical Guitar but with a thinner body, nut width and action that more closely resemble a Flamenco Guitar.

They have also employed their A.R.E. (Acoustic Resonance Enhancement) technique to prepare the tonewoods in order to produce a result that makes them sound like aged or vintage instruments. This feature is also found in the higher spec'd NTX1200R.

The SYSTEM61 + ART 2-Way Pickup system was designed by Yamaha specifically for nylon strings and you can find it on their NCX and NTX ranges. It sounds good on stage and with a little tweaking of the 3-band EQ you can even get it sounding fairly lively when recording directly into your audio interface.

It also has a built-in tuner which is a handy touch.

The solid spruce top gives it reasonable projection when unplugged, but with it's thin profile don't expect a big boomy sound.