For a powered speaker that weighs under 25 pounds the Yamaha's DBR10 is as loud as it gets putting out a massive 129 SPL with good clarity and at an agreeable price of under $400. With a 10" main speaker you might expect that it would be a bit lacking in the bass department but it performs reasonably well there too with a frequency range down to 55Hz. It's the combination of portability, power and price that makes this such a compelling option and why it's been so popular and well regarded since the DBR series was released in 2014. It's widely used not just as a PA speaker but also as an instrument amp and stage monitor. I personally use the DBR10 as an 'FRFR' amp with guitar modeling as well as a PA / FOH speaker and stage monitor.

The DBR10 is a neat and 'classy' looking cabinet suitable for 'polite' company. There's none of your 'junkyard dog' looking square front grills here. Instead there's an attractive hexagonal pattern with circular cutouts on the front. The feel of the cabinet is pretty sturdy for such a lightweight unit and you get the impression it would be able to take a fair bit of impact. The moulded enclosure however does look like it could scratch pretty easily and others have reported this happening but so far I've only experienced a few minor ones. It's a good idea to at least get a 'Speaker Tote Bag' for a 10" speaker enclosure like this one made by Gator to keep those classy looks. That particular bag has worked well for me. 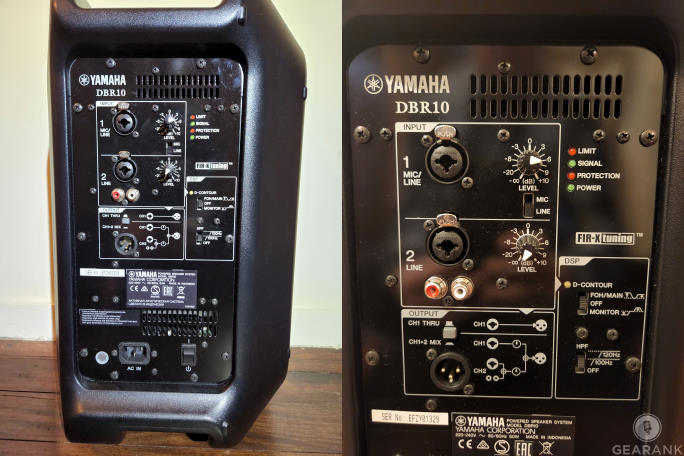 Turning to the back of the unit there's a small angled section to allow it to sit on the floor at a 50 degree angle as a monitor next to the mixer. The mixer itself is fairly standard looking for a modern powered speaker. There are two channels each with an XLR/TRS combo input and volume controls but keep in mind that only one of the channels can accept a mic level input (switchable between Mic/Line). You can tend to think that an XLR connection should be able to take mic inputs but the second channel is only line level so if you wanted to use two mics directly with the unit you are out of luck. The second channel also has stereo RCA phono connectors for adding program music. I can confirm that you can actually use these at the same time as the line input. It's probably not the best way to do it but if you can balance the volumes of these inputs you could call it a 3 channel mixer.

There's also a DSP section with Yamaha's 'D-Contour' sound shaping options. The 'FOH/Main' mode dynamically boosts the high and especially the low frequencies for use as the main speaker particularly for recorded music. This really does provide a pretty noticeable bass boost particularly between 70 and 120Hz as you can see in the frequency response chart. The other mode is 'Monitor' which reduces the low frequencies to compensate for the bass build up when used in the floor monitor position. Rounding out the options is 'Off' which is the generic 'flat' frequency response setting. This is generally the best option for use as an instrument speaker or as the main speakers in a performance to give you full control of the mix. In addition to this there's a High Pass Filter switch ('HPF') for taking out frequencies lower than the cutoff options of 100Hz or 120Hz. This is mostly intended for use a subwoofer but can also be handy if you need to tame the low end when using it as an instrument monitor when playing with others. 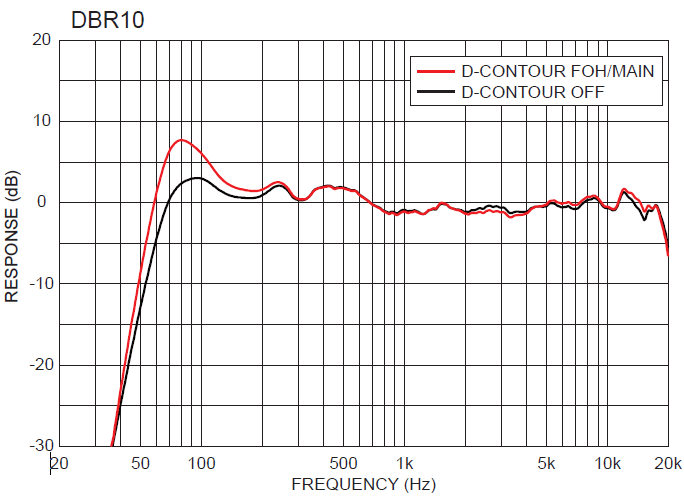 Rounding out the tour there's a single XLR output for daisy chaining and indicator lights; in particular the 'Limit' and 'Protection' warnings for if the speaker is under too much stress due to too high an input or has basically shutdown due to overheating or some other problem respectively. Fortunately I haven't had any experience with these. This is probably a good time to mention Yamaha's extraordinary 7 year warranty and the fact that there are very few credible reports of these things breaking down.

The one criticism I have of the body is that it would have been good to have handle on the side that you can grip properly to carry it around. Instead there's just a slot on the top where you can slide you hand in and carry it upright. It works Ok because it's such a lightweight unit but it's not as secure as I would like and could be fatiguing for some people's fingers.

As a Front of House PA Speaker 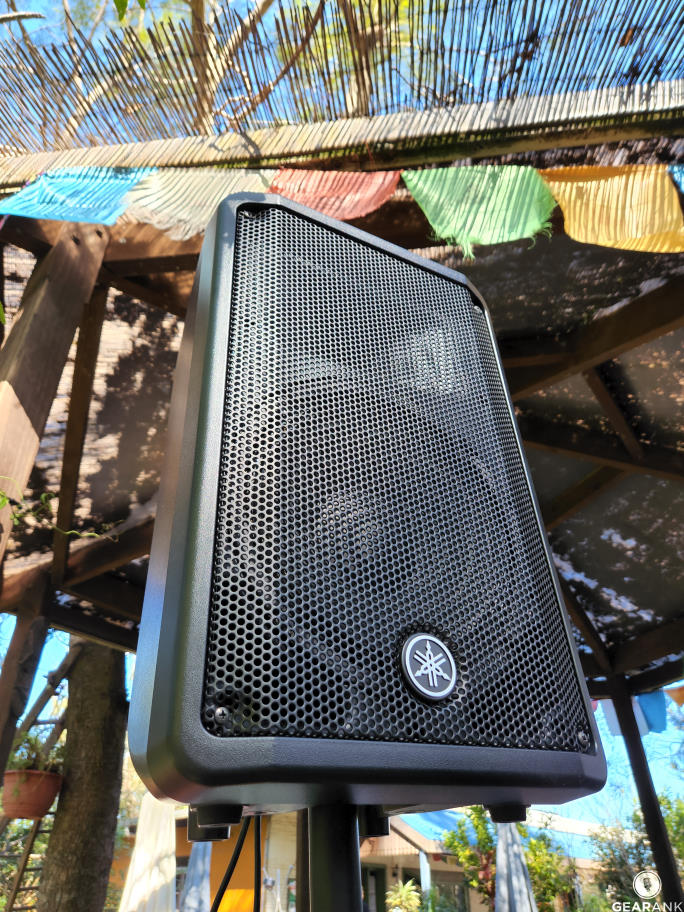 As standalone FOH PA speakers a pair of these perform well in smaller and medium sized venues for styles that aren't loud or bass heavy. The sound they offer is best described as clean, loud and surprisingly full. They provide reasonable bass for many styles but if you want some real 'thump' or are in a larger venue then you'll want to pair them with subwoofers. I haven't done this but they have great reputation for combining well with subwoofers and the HPF switch works well for this purpose.

While the portability is the standout feature of the DBR10 they are quite suitable for fixed situations, coming with a variety of bracketing options for installation. They're great for smaller venues where space is at a premium but keep in mind they aren't as tiny as they are lightweight. If space isn't an issue then you'd be tempted to go for 12" speakers for some extra bass though the DBR10 can come pretty close here to some 12" speakers such as the DBR12 from the same range. Of course if you're pairing with subwoofers this won't be an issue.

As a Stage Monitor 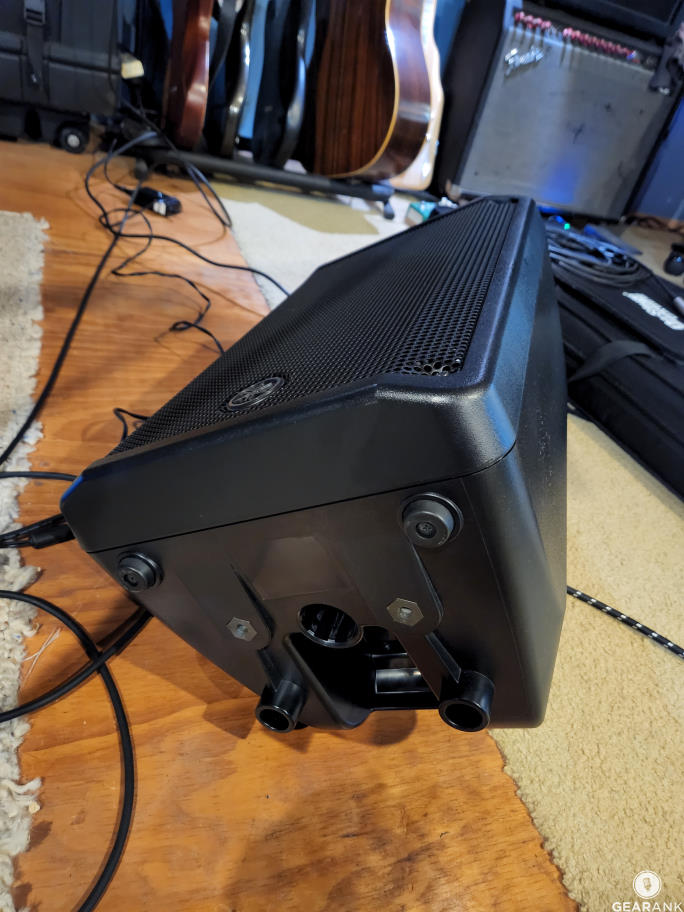 With an option set these as a floor wedge plus the dedicated DSP mode for this the DBR10 makes a really good option as stage monitor. The angled section you rest it on seems a bit small at first but the cabinet balances sufficiently well. You certainly won't want to be resting your foot on it during a solo like you could with a dedicated floor monitor unit though. The sound is quite clear and loud and the smaller size is handy if you have limited stage space. One issue is that the mixing panel on the back is difficult to access or see when floor mounted which makes it impractical to adjust settings live. Some sound guys might see this as a virtue, stopping performers from messing with their settings. 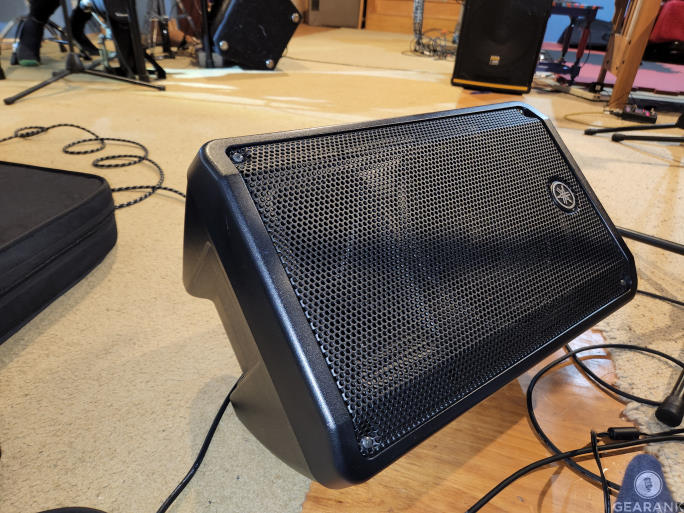 As an 'FRFR' instrument amplifier

The term 'FRFR' is used by guitar amp modelling enthusiasts to describe a speaker/amp combo that has a relatively 'Full Range, Flat Response' so that it delivers the sound of the signal it receives accurately without 'coloring' the sound. Keyboard players, electronic drummers and other instrumentalists have basically been using 'FRFR' amps since before guitarists cottoned on to the concept. As it happens powered PA speakers are not only designed for this but as they've become smaller and more capable they are proving to be quite popular for this purpose. So how does the DBR10 stack up as an 'FRFR' instrument amp? 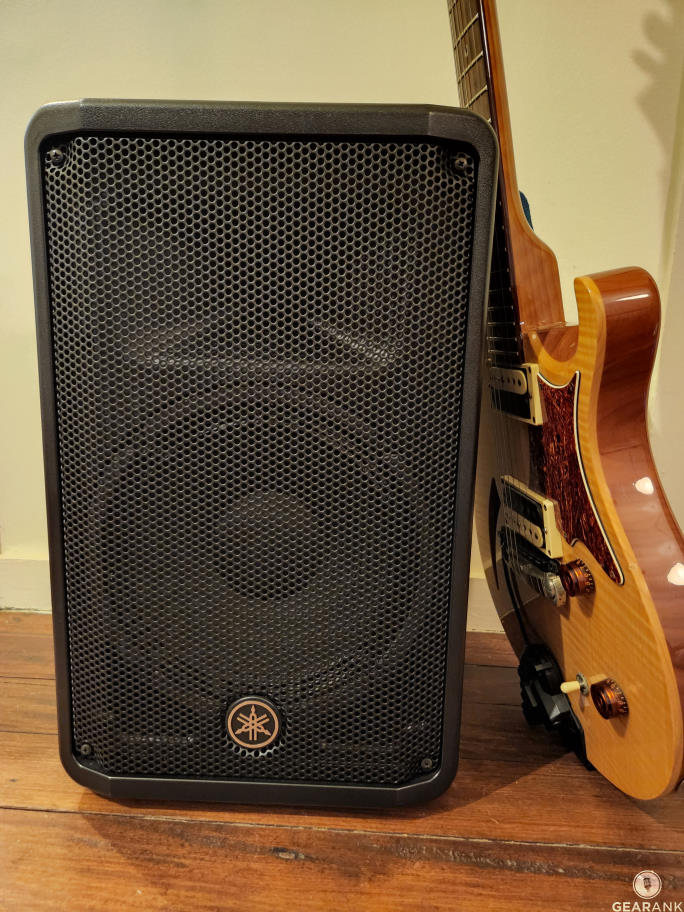 I use the DBR10 with amp modelling effects pedals and I can tell you it performs quite well. I was attracted to this model by a large number of good reviews and reports in guitar modelling circles (and the consistently stellar Gearank rating) as well as the light weight compared to a back breaking valve amp. It offers a beautifully crisp sound for clean and overdriven patches and you feel like you can really hear the sound of the modeled classic amps shining through. Volume wise this keeps up with a fairly loud band comfortably at around 5 on the dial and I think it is a bit louder than 50 watt tube amp overall which is in keeping with the rule of thumb that you need around 5 times the rated 'wattage' power for an FRFR amp vs tube.

There are some people who just prefer the sound of a single 'tweeterless' speaker with electric guitar sounds for a more 'in the room' feel, but to me and many others that's not a problem. I have encountered a few cases where more heavily distorted patches can sound a bit more 'fizzy/sizzly' than they should that are likely due to some a 'not so flat' frequency response somewhere higher in the spectrum. This is an issue a straight 10"/12" speaker would likely avoid or more expensive speakers with flatter frequency responses such as Yamaha's DXR series. Most modelling pedals will have an array of methods to tame problem frequencies like this including EQ, different speaker emulations or even different virtual mic options but it is something of a nuisance to have to deal with. Overall for me and many others it's worth it for the flexibility and the sound you get.

One thing that needs mentioning for PA speakers in general is that they can tend to have a bit of a peak in the lower end of their spectrum from between 70HZ to 100HZ and this can contribute to a certain 'boomyness' that doesn't always suit single instruments like the electric guitar or keyboards (see the frequency response chart above). The DBR10 with it's 10" speaker is actually considered better in this regard than a lot of other options such as it's larger sibling the DBR12. However I've still noticed the issue particularly with acoustic guitar emulations and some degree of 'muddiness' in general when playing with a band. Some keyboardists have reported the same effect as well. One handy quick option that was actually suggested by our very own Raphael Pulgar is to cut the frequencies below 100Hz which thankfully is an easy option via the DBR's High Pass Filter switch. This might be overkill and you may want to fine tune using EQ but it's impressive how much clearer the overall sound can be in a band context with it engaged at very little expense to your tone.

Apart from guitar, the DBR10 is popular with keyboard players as a lightweight option for stage or practice. Some have experienced 'boominess' issues for particular sounds but generally it's well liked. It's reported to handle piano sounds quite well for example. Some use these for electronic drums although the consensus seems to be that this is one area where larger speakers with a bigger bass response would be better. I've actually used one as bass amp myself with a modelling pedal and it handled the task reasonably well but in reality something bigger would be more suitable here as well.

This is a fantastic, affordable, lightweight speaker that sounds great and offers a ton of versatility. It looks good and has been a reliable workhorse for many (including me) that is backed by Yamaha's 7 year warranty. It's suitable for use everywhere from practice at home, on stage as a monitor or an instrument amp, as the main speakers for smaller venues or coupled with subwoofers in larger venues. The power at such a light weight is really the standout feature making it suitable for a wider range of situations. There may be bigger, better, more expensive powered speakers out there but at this weight the DBR10 is in a class of its own.