While on the lookout for a new microphone to upgrade my studio with, I came across the Aston Origin. At first I thought it was a boutique microphone. Its waveform mesh and industrial design brought to mind boutique mics like those from Brauner. I was surprised to find that not only was the Aston Origin affordable, It was also critically acclaimed by experts and hobbyists alike. After being impressed by demos, I got one for myself.

The packaging is minimal by design: Aston believes in cutting corners where sound is not a concern. This means it ships in a very basic cardboard box with minimal packaging flair. This is not a concern for me as the niceties of having good packaging are only useful if your product needs to stand out on the display at a shop. Given the mic's unique appearance, any excess flamboyance in the packaging is unnecessary. 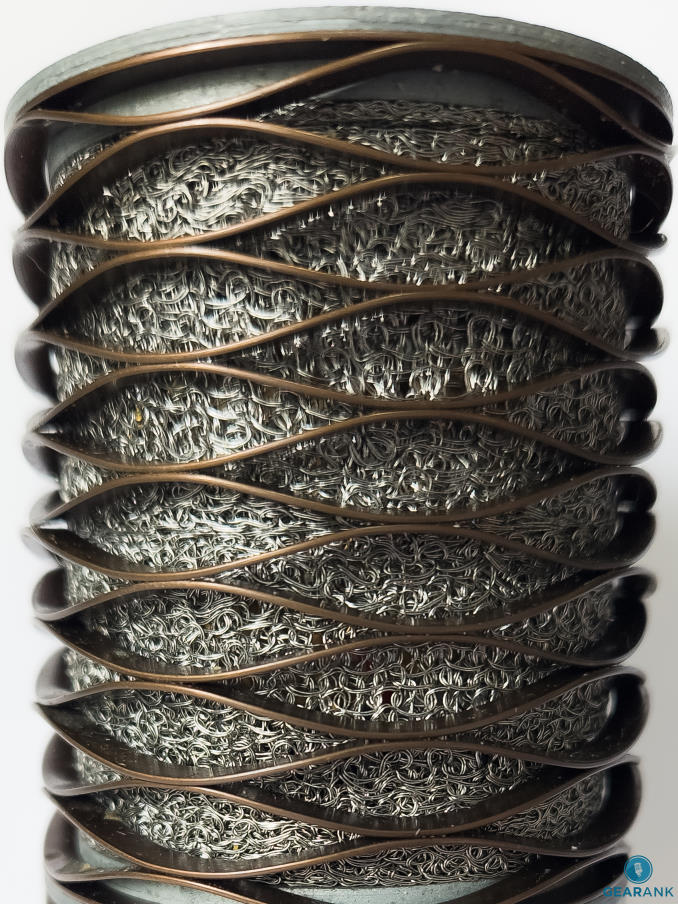 The headbasket of the Aston Origin is anything but traditional. Not only does it serve as a pop filter, the spring-like structure protects the capsule from bumps and tumbles.

The mic itself has a very brutalist-like aesthetic with the unpainted body sporting a special "tumbled" finish achieved by letting the enclosure mix around a chamber with ceramic pellets. The waveform head is the undulating structure visible on the outside of the mic and protects the dual layer steel mesh that also serves as a pop filter.

Aston microphones are designed with the help of a panel of experts Aston calls the "Aston 33", referring to the original 33 members of the panel. They have now expanded to consulting with over 400 audio engineers for their product design. The Origin is a result of several selections made by this panel to decide the best sounding capsule.

Inside the Origin is an internal shockmount for the capsule. This prevents the mic from picking up excess vibrations from mic stands and low frequency rumble from sound sources. 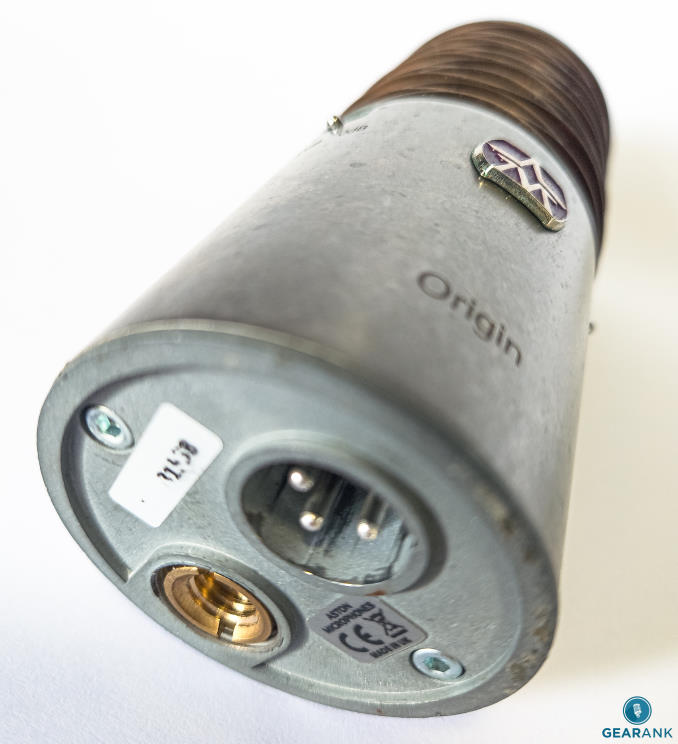 Being internally shockmounted, the mic is free from excess resonance that plagues many mics at this price point. This also enables direct mounting on mic stands with the bottom of the mic having a threaded slot along with an adapter. For those looking for a more traditional setup with a shockmount, Aston offers a packaged version in black with a shock mount and pop filter.

I can describe the sound of the Origin as "mid forward" with slightly less low frequencies than most mics (even without the 80hz filter). It is a very detail oriented mic that captures nuances that most mics at this price point smear or obscure.

The upper mid presence is rich and not harsh with a slight bump in the treble frequencies. I was afraid that sibilance would be an issue but thankfully, the Origin's smooth high frequencies took care of any that would have arisen my entire time using it.

With this forward sound signature, the Origin reminds me of another British-made audio device: Marshall Amplifiers. Like them, the Origin has an aggressive midrange that cuts through the mix with no effort with just enough warmth to keep it from sounding harsh or anemic. Vocals recorded on the Origin stand out in a mix with very little effort, making it perfect for busy rock or metal mixes.

On modern pop, the Origin makes a great lead vocal mic with more intimate sounds available thanks to how well it handles the proximity effect. If it becomes too much, the 80hz roll off switch does the trick. 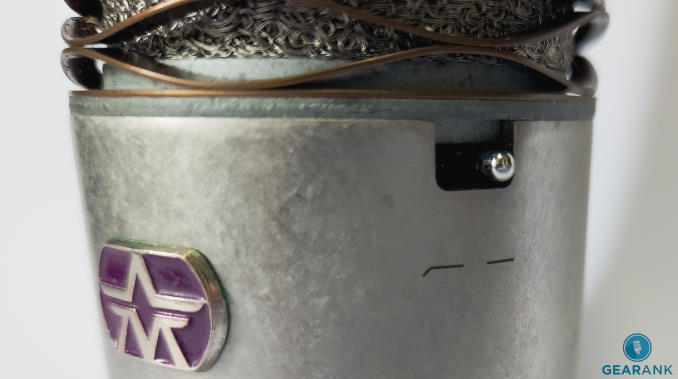 The Origin includes an 80Hz High Pass Filter to remove excess rumble on the low frequencies.

For instruments, The mid-forward tone might be redundant for the aforementioned Marshall-type amplifiers. For Fender cleans however, the mid push and slightly more relaxed low frequencies give a nice, tight recording that's great for rhythm work. 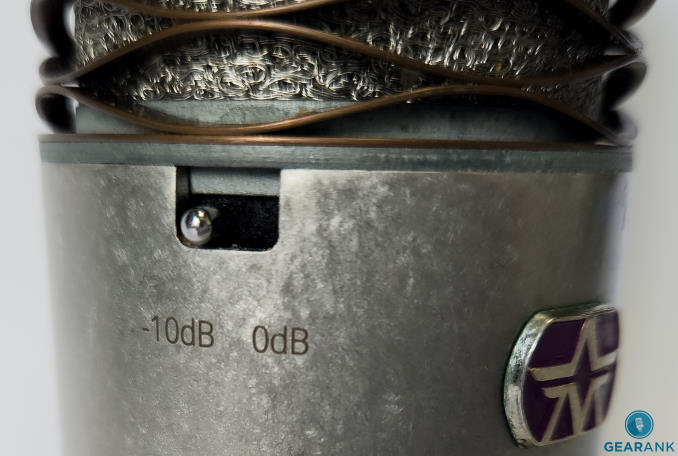 One con I found is that it's not the best for baritone/deep voiced individuals. The relaxed low end may be good for fitting vocals into a mix but it robs deeper vocals of authority and power. It's not a deal breaker but I would reach for a different mic when it comes to voice overs 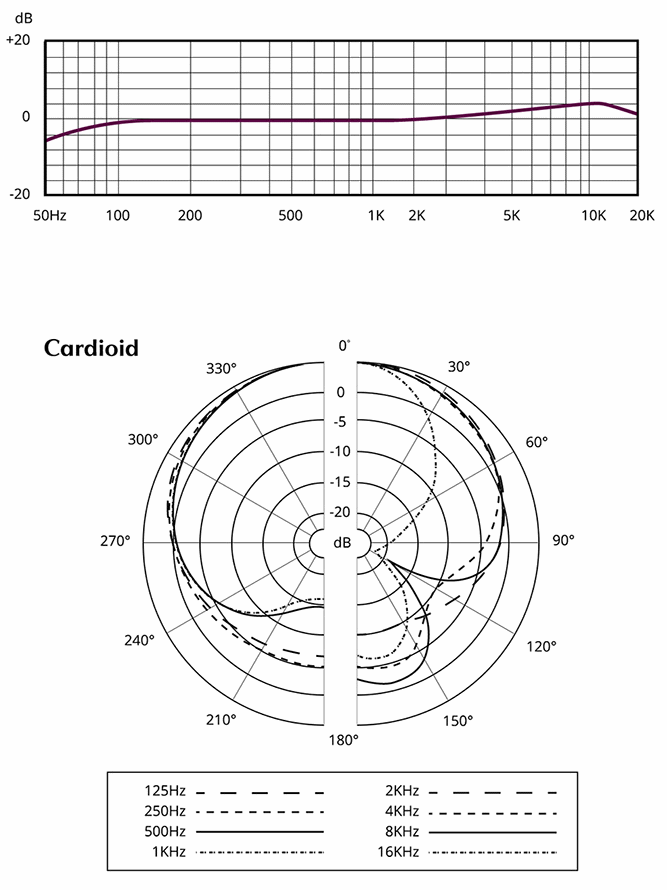 This odd looking microphone has made its way into home studios around the world for its neutral sound signature with just the right amount of harmonic content to flatter most voices. It's an excellent vocal mic for nearly any sound source you can throw at it. Deeper voices might find that the low frequencies aren't as accentuated and thus, would make their voices sound a bit thinner. Nevertheless, the Origin is a great all-rounder that punches well above its price point.

The Origin first appeared on our recommended list for Large Diaphragm Condenser Mics Under $300 in March 2020 where it remained until April 2021 when it was out-ranked by the Audio-Technica AT4040, Warm Audio WA-47Jr and Miktek MK300.

Then in June 2022, after he had been using it in his studio for some time, Raphael Pulgar was so impressed by it that he put it back on our recommended list as his Author's Pick.